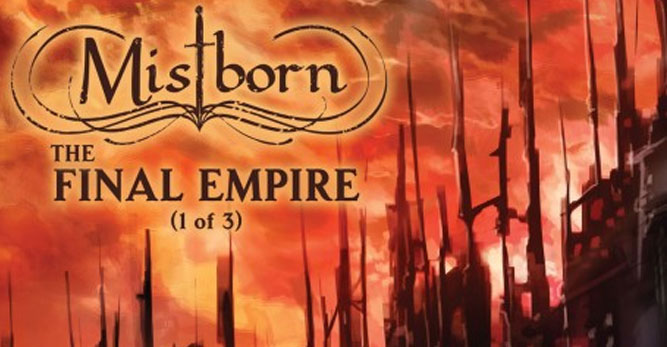 Hi all, I’ve recently been able to start listening to the excellent work by Graphic Audio and their awesome production team that turns books into “A Movie in Your Mind.”  Graphic Audio take books, have multiple actors and a sound effects specialist make into exactly that. It makes Audiobooks great for even those have trouble picturing stories in their mind. This may come with a slightly higher price, but to be honest if you have the money to spend I would definitely spend it on the Graphic Audio version every time if they can keep up with the quality of work I heard in Mistborn: The Final Empire.

Now longtime readers of my Wednesday column know that I love Brandon Sanderson’s work and I figured as a great way to kick off I’d listen to the first Brandon Sanderson book I ever listened to, Mistborn: The Final Empire. 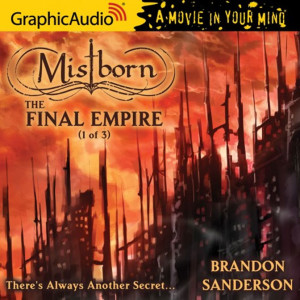 Plot Synopsis:  The Mistborn series is set in a roughly medieval dystopian future on the world Scadrial, where ash constantly falls from the sky, all plants are brown, and supernatural mists cloud every night. One thousand years before the start of the novel, the prophesied Hero of Ages ascended to godhood at the Well of Ascension in order to repel the Deepness, a terror threatening the world whose true nature has been lost to time. Though the Deepness was successfully repelled and mankind saved, the world was changed into its current form by the Hero, who took the title “Lord Ruler” and ruled over the Final Empire for a thousand years as an immortal tyrant and god. Under his rule, society is stratified into the nobility, believed to be the descendants of the friends who helped him achieve godhood; and brutally oppressed peasantry, known as skaa.

Plot: I’ll briefly touch over the plot here, as I’ve covered it in my own post on my blog in the past, but I’ll just say one thing. It’s excellent and is easily one of the best plots I’ve ever read. That being said I kind of regret choosing Mistborn as it is a depressing series and I should’ve picked Warbreaker instead.

Voicework: Way too many people for me to even try to attribute them to characters, but they all did an excellent job. My only real question and hope is that in the future Brandon Sanderson series they use someone a bit less gruff sounding for Hoid, a character who appears in all of the Adult Fiction series Brandon does.  Props to all of them and here is a list to show the work that goes into this for just voicework.  Terence Aselford, David Jourdan, Kimberly Gilbert, Thomas Keegan, Michael John Casey, Tony Nam, Danny Gavigan, Mort Shelby, Steven Carpenter, Michael Glenn, Christopher Graybill, Ken Jackson, Nick DePinto, Gregory Gorton, James Lewis, Scott McCormick, Evan Casey, Richard Rohan, Gary Telles, Nanette Savard, Joe Brack, Tim Getman, Alyssa Wilmoth, Nathanial Perry and David Coyne.

Sound Effects: Now you might be saying, Michael you are reviewing an Audiobook why is there a part for Sound Effects. That’s part of the appeal of Graphic Audio and they did an amazing job with Mistborn: The Final Empire and even had the sound effects for Allomancy down quite well.  I can only they can match this for Brandon Sanderson’s Epic Fantasy series The Stormlight Archives.

Overall: This audiobook might be expensive, but it’s well worth the price.