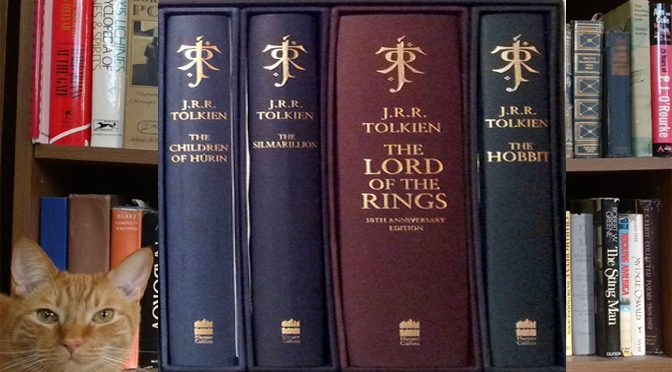 The Lord of the Rings Saga

Editor’s Note: Bill Jackson of the Tech Writers Bureau and Cybereye fame will be reviewing a series of classic books for GiN over the next few weeks. These are great stories that you might have missed, or might just miss, and which some of our favorite videogame tropes are likely based.

With the birthdays of Bilbo Baggins and his nephew Frodo fast approaching it seems appropriate to consider J.R.R. Tolkien’s Middle Earth sagas. It was on his birthday, Sept. 22, that Bilbo arrived at Laketown with the dwarves on their journey in The Hobbit. On the same date 50 years later Bilbo gave the long expected party that begins The Lord of the Rings.

The Hobbit and The Lord of the Rings are the beginning and end of fantasy literature. Bookshelves are full of fantasies, some written before and many written after these, but Tolkien defines the genre. It is not just that Tolkien was a good writer; he was a scholar of great creativity who combined his knowledge and imagination to create a world complete with the languages of the people inhabiting it.

The stories cover a short period in the Third Age of Middle Earth, describing the final battle against evil that ends with the fading of the age. Although all the free peoples of Middle Earth take part in the struggle—elves, dwarves and men—the stories focus on the part played by hobbits, a small people living in the Shire who until then had not appeared in Middle Earth’s history. “But in the days of Bilbo, and of Frodo his heir, they suddenly became, by no wish of their own, both important and renowned, and troubled the counsels of the Wise and the Great.” 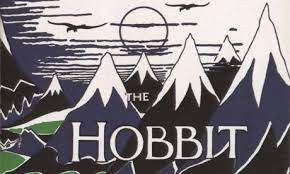 The Hobbit is a children’s book, published in 1937, but like the best children’s literature it is for adults as well as youngsters. It tells of Bilbo, a middle-aged hobbit who is chosen by the wizard Gandalf for an adventure.

Like all respectable hobbits, Bilbo has no use for adventures. “Nasty disturbing, uncomfortable things,” he calls them. “Make you late for dinner!”

But Gandalf sees unsuspected qualities in Bilbo and at an unexpected party arranges for him to be the lucky number for a troupe of 13 dwarves seeking to recover their ancient treasure from a dragon. His official title is burglar and his contract calls for him to receive a 14th share of the recovered treasure, plus funeral expenses if necessary. Bilbo has more than a few second thoughts, but Gandalf’s assessment of him proves correct; the hobbit displays unsuspected courage, resourcefulness, judgment and luck. The fact that he acquires a magic ring in the course of the adventures also helps.

Bilbo returns home with a modest treasure but is no longer quite respectable. “He may have lost the neighbour’s respect, but he gained—well, you will see whether he gained anything in the end.”

The Lord of the Rings

In which we see that Bilbo is not unique among hobbits

Bilbo’s finding of the ring sets the stage for the next tale. It turns out that it isn’t just a ring, it is The Ring. It belonged to Sauron, the personification of evil, and he wants it back. Once he recovers it there will be nothing standing in the way of his domination of Middle Earth.

The ring cannot be hidden from or used against Sauron. It can only be destroyed. Bilbo has passed the ring to Frodo, his nephew. Frodo accepts the mission and is joined by a fellowship of hobbits, dwarves, elves and men. In the course of the epic story we see that the unexpected qualities demonstrated by Bilbo are shared by his fellow hobbits. There is more to hobbits, it seems, than meets the eye.

[amazon asin=0345538374&text=Want to know why your favorite fantasy game, movie or book is so amazing? Find out where they came from with a copy of the whole Middle Earth saga from Amazon!] 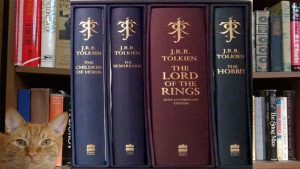 The tale is told in three volumes, The Fellowship of the Ring, The Two Towers and The Return of the King. Although the trilogy has become the standard format for fantasies, The Lord of the Rings is not actually a trilogy. It is a single story told in six books, originally published in three volumes. Tolkien began writing The Lord of the Rings in 1937, soon after publication of The Hobbit, and it was published in 1954.

Much of this story, particularly the last volume, paints grim picture of a world at war and is influenced by Tolkien’s own experiences in World War I. The book’s conclusion suggests that Tolkien understood post-traumatic stress disorder decades before the term came into use. The frustration Tolkien must have felt at seeing two world wars in 20 years is expressed in an exchange by Gimli the dwarf and Legolas the elf: “The deeds of men will outlast us, Gimli,” said Legolas. “And yet come to naught in the end but might-have-beens, I guess,” said the dwarf.

One of the pleasures of Tolkien’s books is that he has created not just a back story for the War of the Ring, but an entire history for Middle Earth. In addition to miscellaneous tales and poetry, additional volumes of Tolkien’s work have been published posthumously, including The Silmarillion, The Children of Hurin, and most recently The Fall of Gondolin, all edited by his son Christopher and telling of the ages before the War of the Ring.

If you love Tolkien’s work you probably know as much of Middle Earth as I do, if not more. If you don’t already know his work you might have a great treat waiting you. Epic fantasy is not everyone’s cup of tea or mead, but there is something about hobbits that is hard to resist.