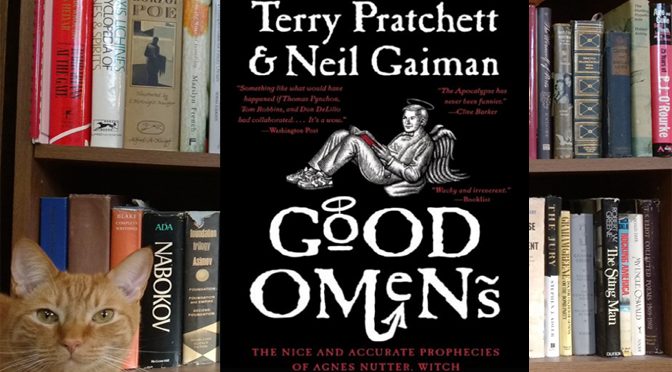 To call Good Omens a cult classic is to damn with faint praise. I can’t imagine any fans of Terry Pratchett and Neil Gaiman who haven’t already read this book. Everybody else should read it, too. It’s that good.

This is the first collaboration between these two giants of modern fantasy, and since Pratchett died in 2015 it is likely to be the last. That is a shame, but we are lucky to have this wonderful piece of work from them. In explaining how the book came about, they wrote that Gaiman had sent half of a short story to Pratchett and asked for help coming up with an ending. “I don’t know how it ends,” Pratchett replied, “but I know what happens next.” Devoted fans of Pratchett and Gaiman probably can discern which parts are from which author. To me, however, it appears seamless.

What eventually emerged in 1990 from several months of back and forth between the two is a fantasy of the End Time, the coming of the apocalypse.

According to The Nice and Accurate Prophecies of Agnes Nutter, Witch, the End is supposed to come next Saturday around dinner time. Everything is ready except that the Antichrist seems to have gone missing. Can’t have Armageddon without the Antichrist, so it is up to a Earth’s resident angel and demon to find him before it’s too late; or else. Or else, what? You don’t want to know. 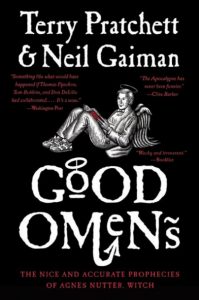 The main characters of Good Omens are the angel Aziraphale, who was on duty at the East Gate of Eden that fateful day 6,000 years ago (it turns out that Bishop Usher was right about that), and the demon Crowley, who was known as Crawley back in the garden. They have been on Earth ever since that time and have come to like it here. Aziraphale now is a fussy rare-book dealer and Crowley a rakish bon vivant. In fact, they have gone native, and like many long-time resident agents they have found that they get along better with each other than with their respective home offices. It’s not as if they are actually friends or allies, but neither is really enthusiastic about the apocalypse. Still, orders are orders.

There is also an assortment of other angels and demons, witches and witchfinders, an inefficient coven of satanic nuns, the Four Horsemen (now Bikers) of the Apocalypse, a jezebel, one hellhound and a gang of abnormally normal boys and girls.

Agnes Nutter is history’s only accurate prophetess, and her Nice and Accurate Prophecies play an important part in bringing everybody and everything together. Agnes herself makes a brief appearance. The story is as compelling as it is funny, and it is funny enough to read over and over.

Nobody wants to be on the losing side of Armageddon, and it seems a waste to do away with everything Earth has developed over 6,000 years. Sure, there are plenty of bad things: War, highways, telephone answering machines. But there are also books and good food and drink. But God has his ineffable plan and neither angel nor demon nor man can stand in its way.

It takes some effort to straighten everything out, but everyone is happy in the end. Well, almost everyone—demons in hell probably are never very happy. But it pays to remember that despite all the running around we do, God still is in charge. As Paul Simon wrote:

The information’s unavailable to the mortal man.”

According to Pratchett and Gaiman, fans of Good Omens tend to read the book until their copies fall apart and then buy new ones, so the book remains in print and you shouldn’t have any trouble finding a copy at your local library or bookstore.