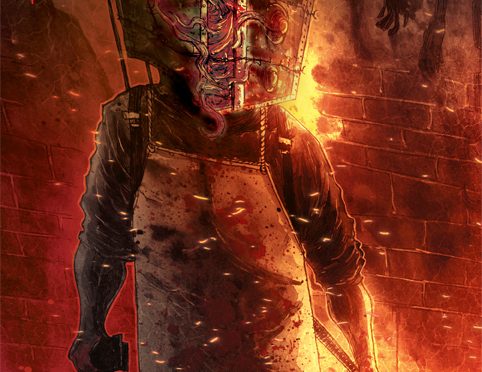 Prequel comics seem to be the latest trend in marketing for games, but without the right care and attention, they could do more harm than good. Sadly, The Evil Within #1 fails both as an enticing start to a comics series and as quality teaser for the eagerly awaited survival horror from Shinji Mikami. We are also reviewing the game of course, but wanted to look at the accompanying comics as well to see if they were also worthy of picking up.

The comic tells the story of events before the game starts. Dana is out on a dark, stormy night, looking for her missing friend Kate, only her car breaks down. She wanders towards some lights and finds a deserted diner scattered with plates of what I thought was dead rats, but later turns out to be rotting food.

At the end of this confusing scene, there is another jump, but this time it’s deliberate and a bit clunky. If they’d used the same disjointed panel sequences as before, it might have worked. Instead, we wake up in a house of horrors, which turns out to be an abandoned asylum. There is no cliche left unturned here. This doesn’t have to be a bad thing, but in this case, it is.

Outside the diner, Dana meets Paul, who just woke up here, apparently. They spend the rest of the comic running away from  things, while filling us in on their back stories. And then they successfully run away from everything that comes their way, without even a scratch.

Even though they’ve entered a hellish, nightmare world, Dana and Paul seem to take it all their stride and by the end of issue one, don’t come to any harm. I haven’t played the game, but judging by the trailer and the Mikami’s pedigree,  things get a lot tougher for gamers.

There’s nothing to recommend this comic. I don’t think it will satisfy fans of the game or curious comic collectors. Even horror fans won’t find much to make their blood run cold, other than bad dialogue.