I’m back with a book I was approached directly by the author with a request for review, and while it’s definitely not my standard genre, I did read it and found it very thought provoking. It’s time to enter a house of horrors with Twisted by Michaelbrent Collings! 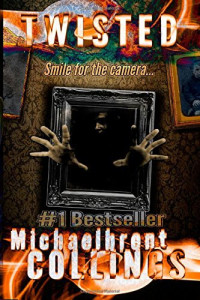 Plot Synopsis: The Douglas family just wants to live their lives, and maybe find a bit of happiness. But when the ghost in their home breaks out of a centuries-long sleep, all hope for happiness will die. Because the thing that haunts them is not just evil…it is something much, much worse. Watching them from the shadows. Hungry to start killing once more, and thirsty for the blood of the children, the blood he has so long been denied. The thing that haunts them is not just evil. It is twisted.

Plot: The plot is quite thrilling, and like I said above, thought provoking as it deals with some not so standard horror tropes like child abuse. I was thoroughly frightened by the book, which I suppose is the whole point of the book, so a huge success in that regard. It was also a success in regard to dealing with those not so standard tropes as it really did make me think about things like the cycle of abuse. I enjoyed this book quite a bit, but more for the thought provoking aspects than the horror. I don’t tend to enjoy Horror as a genre in anything as I’ve got enough nightmares of my own to deal with.

Characters: The Douglas family is a fairly standard main cast, and the book focuses primarily on them alone. I won’t spoil the surprises, but I did enjoy the cast as they were quite believable.

Overall: If Horror is your fare, this is an excellent book to pick up and give a read or a listen to.