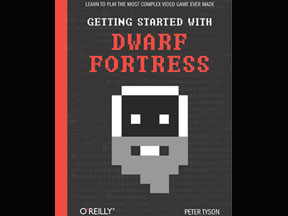 Getting Started With
Dwarf Fortress

Getting Started With Dwarf Fortress: Learn to Play The Most Complex Video Game Ever Made is practically essential if new players want to do anything more than scratch the surface of the freeware Dwarf Fortress game. Without it, I know I would have been as lost as a beardless dwarf in Elfland when I was putting together my review of the game earlier this week.

Successfully playing Dwarf Fortress is an amazing experience, but probably 99 percent of the people who try it out won’t get very far. It does many things right, but making gameplay easy isn’t one of them. There is no tutorial or handholding within the game. It’s as if the developers expect everyone who plays to be born into the title as experts. Because of that, I think you really do need this book if you want to make any real go at getting things done. Dwarf Fortress is about as complex as a programming language, though a lot more fun, eventually. The book can help flatten out that learning curve from an impossible cliff to merely a steep rise.

What author Peter Tyson does is walk new players through the process of embarking with their initial seven dwarves and getting a basic fortress running. He also helps them to avoid many pitfalls that would doom new players, like building over an aquifer, leaving your home city without the requisite number of picks, chickens, cats and other essential gear, and how not to deploy to an area infested with undead or acid rain or angry goblins. Only much later in the book are advanced concepts discussed. The bulk of the info is how to just get off the ground with probably the hardest game ever made.

Readers can either create a world in the game and then follow along in the book, or read the book from cover to cover first like I did, and then follow along. After reading the entire book, I actually found that I possessed a modicum of skill with the game where my dwarves could survive for a few minutes without some major mishap dooming them all, though I still followed along the first few times I played, and then again when I tried to explore the many advanced strategies.

I liked the layout, which was mostly chronological based on the most likely problems new players will experience. First we are taught how to generate a world, equip for the expedition and dig out our first few rooms. Helpful tips like making your entryway three spaces wide so that trade caravans, which need that much room for their wagons, can get inside to your trading post are nowhere in the game itself, dooming new players without that knowledge to failure. Early dangers like wild badgers and wandering goblins are next discussed, with suggestions about how to keep them at bay using traps as well as what materials and what workshops are needed to construct everything for some basic protection.

Tyson then explains how to proceed by digging deeper into the ground to carve out new levels and how to setup better defenses like working drawbridges, moats and firing ports, as well as how to train dwarves to work them all. How to avoid many mid-game pitfalls are also explained, like how to find out if one of your new immigrants is actually a vampire, how to keep dwarves from going insane and killing all their friends, how to keep pets from getting squished under your mining carts, and what to do if any of these unfortunate events occur.

There are also quite a few advanced strategies shown, like how to maximize your metal or glass industries, how to farm food underground, how to keep your workers safe as they tunnel miles into the darkness and even some really amazing things like powering devices and even making a computer. Some really crazy strategies like employing a vampire as a ‘lever commander’ sealed away in a room so he can throw switches and activate defenses should the goblins invade (they almost always do) are suggested. In the case of the vampire, Tyson suggests adding a one-way hole so that new clothes (a vampire’s only real need other than blood) can be dumped down to them.

The book has some nice tips and warnings throughout the text that call attention using graphics to common problems new players often run into, which is a nice way to show that something is really important and you should pay attention or even take a note. There are several cartoons that mostly serve as comic relief or as rewards for finishing a chapter. A lot of the cartoons are sort of like inside jokes, though as you read and begin to understand the game, you will actually understand them.

The one real negative is not the fault of the author, but more so the publisher. Dwarf Fortress only uses ASCII characters for graphics, but a lot of info is displayed using color. Getting Started With Dwarf Fortress is only printed in black and white, so many of the charts showing what the symbols in the game mean are difficult to read and could denote different things depending on their color. It would have been nice if O’Reilly would have at least sprung for some spot color where all the charts that depend on it could have been clustered. Of a more minor concern is the fact that Dwarf Fortress is a work in progress, the developer has been updating it since 2002, so there is a danger that some of the info in the book might eventually be out of date. This is only a minor concern because even if that happens, the core-gameplay and how to get started probably won’t ever change, which is really what this book is all about.

I am a perfect reviewer for this book’s usefulness because I never played Dwarf Fortress before. Loading the game up the first time, I was lost. I could barely even get the game to work with all the complex commands, let alone survive. Then I read the book, and suddenly I could get things done. I still died horribly, but as the book points out, almost everyone will die because losing is a part of the game, and can be quite fun. Still, without this guide, I wouldn’t have had any fun at all. Of all the things you can pack for your expedition, make sure Getting Started With Dwarf Fortress: Learn to Play The Most Complex Video Game Ever Made is one of them.