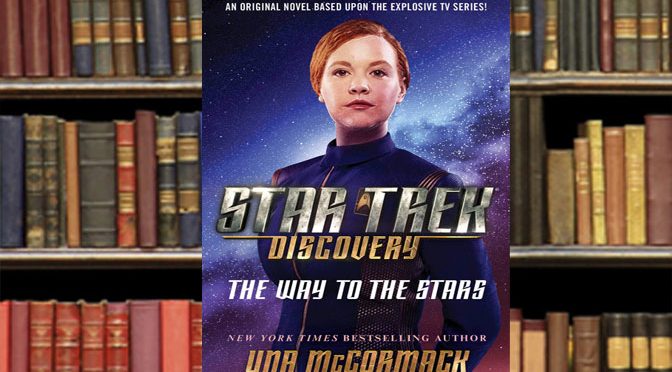 Star Trek: Discovery
The Way to the Stars

This book gives us the background of Sylvia Tilly, the Starfleet Cadet on Discovery and how running away from home, boarding school experiences and her parents’ divorce shaped her. Having a mother who is a Delegate in the Federation and a father who is a Starfleet Officer can put lots of pressure on a child. It also explores how someone copes with trying to be something they are not to please others.

The Star Trek: Discovery Franchise is on CBS Access and set during the same time as when the Enterprise first set its course for the stars. The present commander for the Discovery is Captain Pike, a long time tragic figure in Star Trek lore, and the original Captain of the Enterprise, who Spock first served under.

In the show Sylvia is a cadet in her final year of the Academy, serving on the Discovery. This book shows the winding path she took to serving in Star Fleet. Something her considerably powerful and influential mother worked against. 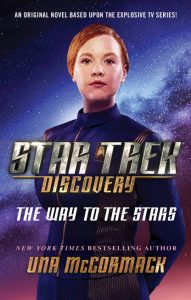 The book begins with Tilly’s mother forgetting her birthday, then Tilly’s French Granna (grandmother), whom Tilly now lives with, confronting Tilly’s self-involved and over scheduled mother. This leads to a dreadful attempt at the mother to take Tilly on a trip that serves her vision of what Tilly should be, a mini-me future diplomat, and not a science centered Starfleet Officer, like her father.

Tilly is then sent to a Boarding School, which specializes in teaching future diplomats overseen by the very compassionate Ms. Keith. While Ms. Keith does her best to let Tilly have an Engineering Club and to develop friendships her mother once again inserts herself and it is squashed.

This sends Tilly into a tailspin. She starts to hyper-focus on pleasing her mother and becomes hostile to her newfound friends. Seeing everything as a problem and nothing as a solution. He new friend and roommate moves out and Tilly must concentrate on a debate she doesn’t want to do but that her mother feels is very important. Tilly begins to become obsessive-compulsive about her room, her studies, and cuts herself off from people-ending up in a manic state. This is followed by a terrible anxiety attack followed by a crash and burn depressive episode.

Enjoy The Way to the Stars with a copy from Amazon!

Tilly then, using her impressive engineering skills, finds a way to escape her security contingent, which she is given because of her mother’s position and becomes a stowaway on a ship.

This is some of the happiest Tilly is during the book. She secretly fixes the ship she is a stowaway on, the very Irish named Con(stance) Markievicz. (Constance Markievicz was an Irish Revolutionary, suffragette, and the first woman elected to the House of Commons in the United Kingdom.) Her surreptitious repairs to everything from drips to the food processors reveals her to the Captain, Reah Maris.

From there the reader gets to see Tilly come into her own and put her on the path to independence.

This book takes scripted characters from the Star Trek: Discovery show and makes them into characters you can believe in on the page. The issues Tilly deals with are well portrayed and the writer did an amazing job of giving a immersive backstory based on just a few clues in the show. Bottom line is if you like Star Trek and like Discovery you will like this book!