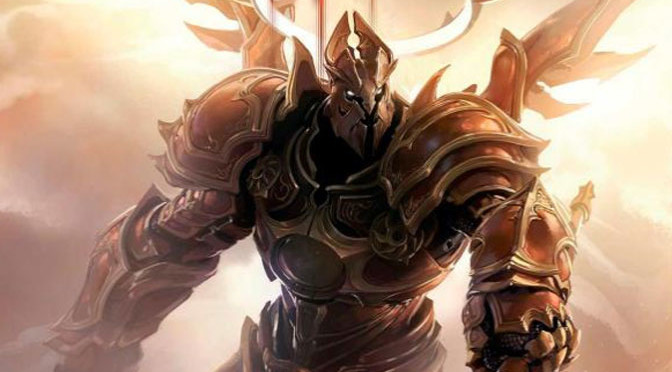 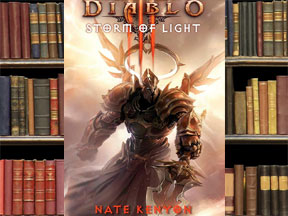 Storm of Light is high fantasy that highlights the constructed history behind the video game Diablo 3. In this universe angelic beings called the Agiris Council, who defeated the demonic Prime Evil, now stand guard over an artifact called the Black Soulstone. Much like Bilbo’s ring this stone slowly corrupts those who possess it. The problem is the Agiris Council keeps it in a heaven like place called Silver City.

In this cosmos, the High Heavens Silver City sits above with an equally powerful Burning Hells below. Between these poles sits the world of humanity, Sanctuary. The defenders of humanity are the Horadrim; a group of heroes whose mission is to save humanity. “Storm of Light” tells the story of these heroes.

Nate Kenyon, the author, does a convincing job of putting supernatural heroes in a conflict that combines Angelic lore and eschatology. The Horadrim heroes are; angel-turned-human Tyrael, the doom haunted Jacob, Jacob’s past paramour the wizard Shanar, a mystic monk Mikulov, the scholarly Cullen, the barbarian warrior Gynvir, and the surprisingly nice necromancer Zayl.

The novel is written in multiple viewpoints, with Tyrael, Jacob, Mikulov, Zayl and other characters given a chapter to advance the action. Many fantasy novels now use shifting third person limited omniscience to great effect. Writers such as George R. R. Martin take it to an epic extreme and offer shambling monsters made up of conflicting, competing and complimenting stories that strut over a large unbounded world. Kenyon, taking a smaller, game generated universe, uses complimentary narratives that get the job done in an economic way.

The most interesting viewpoint is from Tyrael: an angel who gives up his wings to become mortal. A member of the aforementioned Agiris Council, he takes on the Aspect of Wisdom (each member of this Council has an aspect: Hope, Valor, Fate, Wisdom and Justice).  He does this when Malthael, the previous archangel who was Wisdom, leaves the High Heavens for reasons both mysterious and sinister.

Tyrael struggles with his new found mortality but it protects him from the influence of the Black Soulstone and gives him insight into how it is corrupting the Silver City. He constantly realizes he is physically weaker now that he needs food, shelter and sleep. But these elements of mortality give him a wisdom that his angelic brethren lack. It is he who brings the Horadrim together and hatches the plan to steal the Black Soulstone from the Silver City.

While many of Tyrael’s chapters are soul-searching and highlight the conflict between the arrogant angels and the flawed yet humble humans, Mikulov’s show a balanced character who is very comfortable with the chaos and views it as an outgrowth of a universe trying to balance itself. He surpasses most of the humans in this book to become superhuman. His monk is a sort we’ve seen before, the Taoist martial artist who remains calm and accepting of any struggle since he has a deeper balance within.

Jacob is not so confident or so supremely competent. He pines for the magic using Shanar while she remains focused on their quest. Her view of their past romance was one of a partnership that became something more for a brief time. He doubts both his own self worth and the success of their mission.

Zayl, the nice necromancer, brings a little comic relief. He carries a sarcastic talking skull in a bag by his side. This skull’s advice is usually to retreat and it comments on any absurdity they come upon. Zayl’s interaction with his skull and the other characters is far more lighthearted than the rest.

If these characters and their situations intrigue you or if you are a Diablo fan, Storm of Light is a must read.