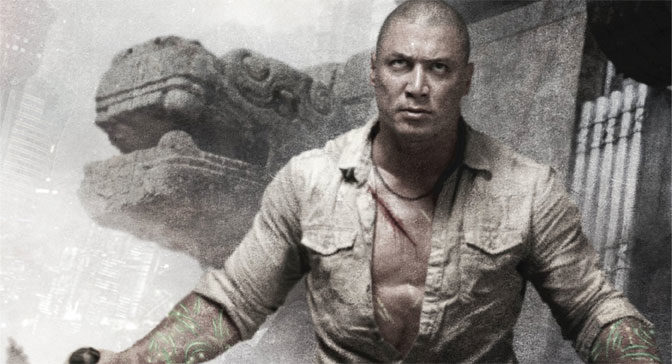 Hey all. I’m back with a brand new series from the wonderful people at Tor! It’s Last First Snow, a Craft Sequence Novel, by Max Gladstone.

Plot Synopsis: Forty years after the God Wars, Dresediel Lex bears the scars of liberation―especially in the Skittersill, a poor district still bound by the fallen gods’ decaying edicts. As long as the gods’ wards last, they strangle development; when they fail, demons will be loosed upon the city. The King in Red hires Elayne Kevarian of the Craft firm Kelethres, Albrecht, and Ao to fix the wards, but the Skittersill’s people have their own ideas. A protest rises against Elayne’s work, led by Temoc, a warrior-priest turned community organizer who wants to build a peaceful future for his city, his wife, and his young son. 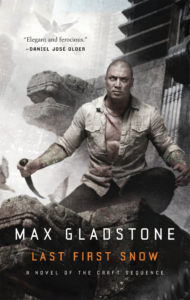 Reviewer’s Note: So let me get a few things out of the way first before going into the plot. Max Gladstone decided to do things a bit differently with this first series of his, The Craft Sequence. He published the third book in plot chronology first. So Book #3 was released first, well before Book #1 (which is Last First Snow by the way). I was puzzled about how to handle this series for months, and finally decided to just go through the plot chronology instead of publication order. The main reason for this decision was that Book #4 was released recently and I received it just a week ago at the time of my writing this review. This will allow me to read Books #1 through 5, as I had already received the other four books in my first shipment of review copy novels from Tor. Maybe I’m going through this series “the wrong way,” but I prefer not to have gaps in plot. Now on to the plot!

Dive into this brand new series with a copy of Last First Snow from Amazon!

Plot: The plot is excellent, it reads like a Law and Order show made into a book, except the lawyer, Elayne, is also a near god-like magician who is working for a skeletal “Evil Overlord”. I read this in nearly one sitting, only taking a break for lunch in the middle of the book. Some things like the magic weren’t very clear, and this might be due to the fact that this is the fourth book in order of publication, but I didn’t mind that too much. I figure I’ll understand things more after reading the sequels. This is clearly a story that doesn’t have a good and evil side, it reflects our reality where most things are shades of grey. I appreciate that, although I don’t mind having clear cut villains either that much.

Characters: Elayne and Temoc are our two main PoV characters for the book, with some other side characters getting some time as well. Elayne is a war-mage turned peacemaker through practicing law and Temoc is a former warrior-priest turned family man. Their friendship and conflicts with each other make the book very interesting and it will probably play a huge part in the overall plot of the series. That isn’t to say that they are the main stars of the show, I have a feeling that we haven’t seen the last of The King in Red or Caleb, Temoc’s young son. Caleb in particular is a favorite character of mine, mainly because he reminds me of my own younger brother who loves card games as much as Caleb does. We actually will probably see lots of side characters become much more important in later books. So overall the cast is wonderfully diverse.

Overall: Last First Snow is a wonderful Urban Fantasy/Political Thriller novel for any adult lover of books. Younger audiences may not enjoy the subtleties of some plot points.

For those who like: Urban Fantasy, Political Intrigue, Law and Order, Drama, Excellent and Diverse Cast of Characters, Fantastic Plot.