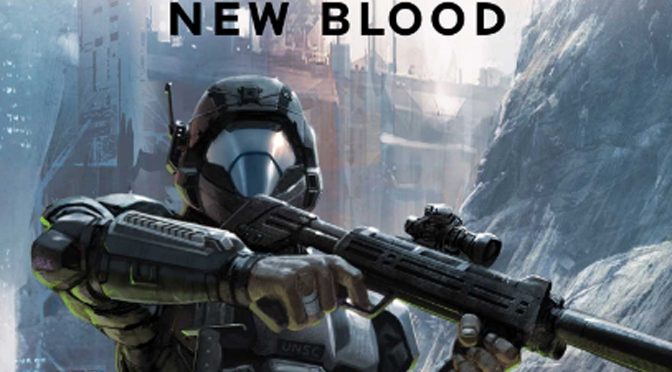 The “new blood” referred to in the title of Matt Forbeck’s Halo: New Blood novel refers to the protagonist Gunny Edward Buck becoming a new generation of Spartan, Spartan IV. Told in the first person it explores the inherent conflict between the United Nations Space Command (UNSC) and those rebelling against the interstellar government. It also has some Covenant flashbacks for the most hardcore fan.

Players of HALO 3: ODST will be very familiar with the different characters in this book. Rookie, Mickey Cresco, and Virginia Dare are all here. You get to see these characters through the mind of Edward Buck, as he leads his Helljumpers through alien and civil wars. You also see how Edward Buck, a common soldier, makes the fateful decision to become a Spartan, even though he has mixed feelings about Master Chief and what they represent to humanity. Does being more than human also mean you are less human? 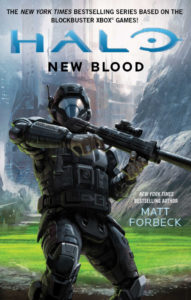 Since Edward Buck was voiced by Nathan Fillion in the game, it made me read the book with his voice in my head. Not that you need that, the character is engaging and complex enough to want to see more of him. This Gunny is no Space Ranger or some dark killing machine of a man. He and the men and women he works with don’t come across as superheroes, merely the very courageous people who end up as soldiers.

[amazon asin=1501128086&text=Dive deep into the world of Halo with a copy of the engaging Halo: New Blood from Amazon.]

I always enjoy seeing how the politics behind the UNSC make for both a human civil war and an in-service rivalry with the Office of Naval Intelligence (ONI). While this drives the action in the game it also drives the plot in this book. To see humanity fight the Covenant, while also fighting themselves, is much more realistic than some science fiction cliché where all nations come together seamlessly to face alien invaders.

We also get to see the relationship arc of Edward Buck and fellow soldier Veronica Dare. Her back-story, paired with his, shows how a war and work romance might work out. There are some enjoyable scenes of awkward encounters during combat and conferring with others, as they have to navigate their feelings for each other and their mission. The point of view of those rebelling against the autocratic UNSC is not ignored. While they don’t get center stage, it is an essential part of this story. War is not just between warriors. Civilians often stuck in the middle and their stories are part of what makes HALO so enjoyable.

Don’t get me wrong though, the complex storyline does not take away from the action. If you like your Halo books full of charged dialogue, dicey politics, and deadly combat on a galactic stage this is your book. It you want a larger tome full of reflection and regret pass this by.

Check out Halo: New Blood and let us know what you think.