Hey all I’m back with another book from the good folks at Tor. It’s Ball Lightning by Lou Cixin!

Plot: This is a very brainy novel, I got lost at a couple points as it went over my head which necessitated me looking up information from the web to help supplement the explanations in the book. That being said Ball Lightning was a very fun novel, if a bit fantastic.

However, given the nature of the Sci-Fi genre that should come as no surprise. But it does serve as a reminder because the novel opens in a contemporary setting that lures you into forgetting that fact. But by the end of the book that fact will be very much in your mind. 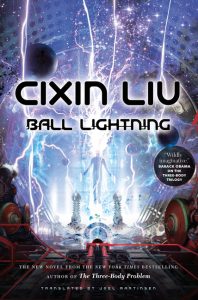 Characters: The characters are all interesting, with Chen being the lead character and narrator. He’s very much the driven person, and is a serious workaholic when it comes to learning about the titular natural phenomenon. The rest of the cast is also interesting, and fans of Mr. Liu’s other series, the Three Body series, will recognize a younger Ding Yu. Or so the author states in the afterword, because as I have yet to read that series myself. I’ll have to take the author’s word for that.

Overall: Intense and Brainy, Ball Lightning is a must read for any hardcore Sci-Fi fans.

[amazon asin=076539409X&text=For once, a novel lives up to the hype. Pick up the electrifying Ball Lightning from Amazon!]

For those who like: Sci-Fi, Contemporary Settings, Interesting Cast of Characters.