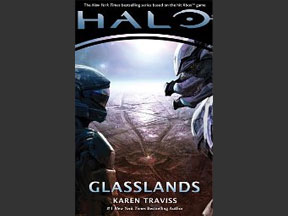 If you’ve done unspeakable things to win a war, how can you win the peace?

This is the central dilemma of the science-fiction Halo novel, "Glasslands" by Karen Davis. Dr. Catherine Halsey, the scientist who orchestrated the kidnapping and genetic manipulation of 75 children to create the super-soldier Spartan II program, goes through recriminations and rationalizations as she explores a new artifact. Published by the science fiction and fantasy powerhouse Tor, this book explores the Halo universe after the war with the Covenant is over and humanity has discovered a Dyson sphere, the next step up from a ringworld.

Indeed, how can you top a world that is a ring? Make an artifact that can surround a whole sun! The developers of Halo tried to get Larry Niven, author of Ringworld, to write some of the Halo novels, but he declined. That’s too bad because Larry Niven came up with the idea of a ringworld, because the original idea of a Dyson Sphere required artificial gravity, more mass and many more issues. A revolving ring made its own gravity through centrifugal force and required less suspension of disbelief. This Dyson Sphere story shows that the creators of Halo are now doubling down on a larger artifact that is not a Halo, but a hollow sphere of titanic size.

Another new thing in this novel is a resumption of civil war, both between the now broken covenant and the human outposts. Admiral Margaret Parangosky of the shadowy Office of Naval Intelligence works to promote these civil wars between the once allied alien races as a way to keep humanity safe, but it’s a less straightforward fight and one that will lead to more complications. She and Halsey have a tete-a-tete that explores how both live with themselves after doing horrible things to win a war.

The most sympathetic character in the book is the mute Spartan III Lucy B091. Her voice silenced from Post Traumatic Stress, she shows the most compassion and the most humanity. It is ironic that a speechless Spartan actually bridges the gap between humans and an alien engineer species called a Huragok. This interaction was the most interesting of the subplots.

Indeed, subplots are what drive most of Glasslands. The focus of the novel switches from the slipspace bubble that encloses the Onyx Dyson Sphere to the ships of the United Nations Space Command and intermittently to scenes of the alien civil war. The alien civil war interludes are the least compelling, since I found it difficult to care about enemies fighting other enemies? Also this novel lacks the large-scale final battle that is central to most Halo games.

This novel is more about the small battles and the interpersonal conflicts that arise when the larger battle is over and the alliances made of necessity are no longer enforced. It’s a perfect bookend to the main story, and perhaps a preview of a new conflict that is brewing in our future.