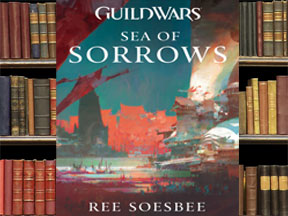 Set in the high fantasy realm of GuildWars, Ree Soesbee’s novel "Sea of Sorrows" delivers a good story. Even if you have not played the video game, you can follow the plot. Soesbee succeeds at this by doing a slow reveal of the details of the fantasy world through the eyes of Cobiah Marriner, a sailor with a tragic past who ends up rebuilding the once great city of Lion’s Arch.

Cobiah’s story is told over decades, laid out in a series of short stories that revisit his life. For example Act One is set in 1219 AE (After the Exodus of the Gods) and Act Two is set in 1229 AE. There are four acts in total and they stretch out over forty years. He begins as a poor teen in Lion’s Arch who becomes a sailor on the doomed galleon, Indomitable, after the death of his sister. By becoming a sailor he is spared the fate of Lion’s Arch when it is swept under the waves. This safety is short lived when an undead monster attacks the Indomitable. This monster carries a curse with it that makes the whole ship and its crew undead creatures under the control of a demonic dragon.

Again Cobiah barely escapes, and this is where the story turns. Cobiah falls in with a race of lion-like humanoids, called Charr, who he learns to live with and even garners the lifelong loyalty of one called Sykox. He also befriends Macha, a brilliant magician/scientist who belongs to the pixie-like Asura race.

Macha is as brilliant as she is infuriating. Her intellect gets her into and out of so much trouble that she is almost comic relief. Her later actions upend this and she becomes tragic. Macha and a mixed crew of humans and Charr become privateers under Cobiah’s command. This crew’s adventures form the lore for much of Guild Wars 2.

At GamesCon 2011 Soesbee took questions from the audience at the NCSoft stage. She announced there that she was writing this novel while directly influencing the making of the second game. "Macha’s Landing" is a place in the reestablished Lion’s Arch, named after her character. This cross-pollination of video games and novels shows how well the developers worked with the story makers.

One of the elements of the story that I enjoyed was how Cobiah comes back to his destroyed city and resettles it with a melting pot of races. It begins as a place for privateers to trade and becomes an oligarchy of Captains. The politics of such a place are maturely portrayed. Instead of heroes and princes marching into a throne room and commanding instantaneous loyalty, factions are formed and broken. Good people end up on different sides of the same issue, with both of them being right.

Another element is the romance between Cobiah and the capable ship captain Isaye. She is someone with loyalty to her home country and family and her love of Cobiah. When she cannot choose who commands the highest loyalty it causes a rift that almost dooms them all. This is handled well, leaving her a complex and noble character in a book that could have been just a shallow knock off of a video game.

I didn’t want to put this book down. As a piece of fiction, it does not slow down or disappoint in action. The fantastical world is a mixture of magic and gunpowder. Muzzle loading cannons fire on sailing ships propelled by the wind magic of elemental wizards. Some of the sea fights reminded me of the Hornblower series by E. M. Forester. I don’t know if the Napoleonic Wars were thought of in the creation of this world, but the different nations and navigational problems all seem to take real historical flavor.

I recommend this book if you want a quick read set in a fantasy world of wooden ships, iron men and formidable women or if you’re a fan of Guild Wars. There is no bad here.