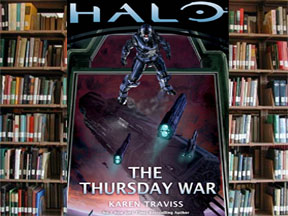 Karen Traviss delves once again into the murky world of counter insurgency and other morally ambiguous methods of destabilization in her latest Halo book, The Thursday War, which is the second book in her Kilo-Five Trilogy.

On the surface of this multi-layered plot you have the official story put out by the United Nations Space Command (UNSC). All are told that the victorious humans are trying to win the peace with the alien Sangheili who allied with them under Thel’Vadam (The Arbiter). This Arbiter, a member of an elite warrior race called the Sangheili, turned against the other aliens in the Covenant to help humanity to victory. The Arbiter is trying to make a separate future for the Sangheili. He wants them to be strong and independent.

Working against these loftier goals is the Office of Naval Intelligence (ONI), run by Vice Admiral Margaret Orlenda Parangosky. They are trying to start a civil war among the Sangheili so as to weaken them further and strengthen humanities’ hand.

Parangosky is an old woman with such a withering stare she is called a medusa. She works with another woman named Catherine Halsey, a scientist who is developing a biological program that would render the food grown on the Sangheili home world poisonous.

This is further complicated by the religious nature of the civil war. The hinge-jawed Sangheili worshiped an extinct alien species called the Forerunners. The Forerunners had left behind the large ring worlds called Halos. On these Halos were advanced technologies the aliens used in the war which humanity won. Now humanity is struggling to control this technology, which infuriates those religious Sangheili who see it as the ultimate blasphemy.

This works against the Arbiter’s vision of a future where his people are allies on equal terms with the UNSC. It was pretty underhanded for Parangosky and the ONI to set up a civil war among the people who helped humanity win against the other alien races in the Covenant, but the book does a good job of portraying the motives of the characters rather than moralize for or against their actions.

The fighting in this book is not galactic in nature but more like a naval bombardment with individual small arms conflicts. When those religious Sangheili that are rebelling against the Arbiter ask why they won’t engage in total war and vaporize whole sections of the planet, one of their leaders named Forze states, ‘Because destroying someone else’s world is warfare. Destroying your own is suicide.’

The parallels to our own world today are obvious. A previously hostile religious enemy is defeated and then the winners must make the decision on how much they own the problem of what to do with the conquered. The intrigue of counter-insurgency and its Machiavellian politics are painted in unapologetically bold strokes. To most of the characters, the ends not only justify the murderous means, they are good means in and of themselves.

This is a story about a defeated people whose small internal feuds are being fed by the victors. The title of the book ‘The Thursday War’ is a British Naval term that describes a long running practice of scheduling small mock conflicts on a Thursday to test readiness. The battles in this book are on a much smaller scale than a typical space opera but the backdrop of the massive Halo universe is still there. As is often the case with a second book in an unfinished trilogy, this story ends with a cliffhanger that hints at a universe-shaking battle to come.

Karen Travis sums up this trilogy well on her website. ‘Plenty to explore in this complex universe where the good guys do very bad stuff too. The Kilo-Five Trilogy follows those saucy spooks of the Office of Naval Intelligence and splendid special-forces marines called ODSTs. ‘The Navy’s here!’ And if you get that reference, then you’ll love this series…’ For those of you not in the know, ‘The Navy’s here!’ is a jingoistic phrase from WW II spoken when the British Navy boarded a German ship called the Altmark and rescued 299 English Merchant sailors. It became a rallying cry during the war.

You need more than a passing familiarity with the Halo video game series to truly appreciate this book. An appreciation of the sub-genre of military sci-fi is something, or military history in general, would also help readers to understand this complex novel. Halo fans seeking a new level of complexity to Halo’s world should definitely check it out.