Firefly Studios, creators of Stronghold Kingdoms, currently the second most popular free-to-play game on Steam, have just released a new patch adding a ‘Crown Prince’ rank to Stronghold Kingdoms. The Crown Prince rank, aimed primarily at high level players, has been added to Stronghold Kingdoms as a twist to the endgame of the popular castle MMO. Previously capped at 22 ranks and 15 villages, an unlimited 23rd rank was added earlier today giving players access to as many as 25 villages. The new rank can be unlocked with 10,000,000 honour, after which players will have to climb a series of … END_OF_DOCUMENT_TOKEN_TO_BE_REPLACED

Firefly Studios, creators of the Stronghold series and free-to-play MMORTS Stronghold Kingdoms, hit a major milestone this week with 500,000 registered players. Yesterday Kingdoms’ 500,000th player joined ‘World 4’, bringing the total number of Lords and Ladies to half a million. World 4 is the game’s newest English-language server, launched on Saturday 3rd March to keep pace with the recent influx of new subscriptions that is showing few signs of subsiding. Achieving this milestone puts Firefly half-way to achieving their goal of one million registered players, which it is hoped can be achieved with new markets and platforms. Firefly does … END_OF_DOCUMENT_TOKEN_TO_BE_REPLACED

Stronghold Kingdoms will be giving away hundreds of thousands of presents this Christmas in the great Stronghold Kingdoms Christmas Giveaway. As a big "Thank You!" to the Kingdoms community, Firefly’s two weeks of Christmas are almost here. Starting next week players of our free-to-play online strategy game Stronghold Kingdoms will be given the chance to win an in-game present every day. Each day in the run up to Christmas, players will have the chance to win a prize by opening one of nine festive boxes when they login. Prizes range from rare strategy cards to premium tokens, with a guaranteed … END_OF_DOCUMENT_TOKEN_TO_BE_REPLACED 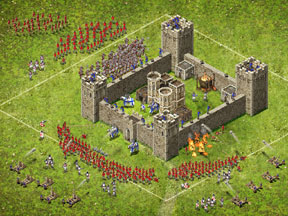 The award-winning Stronghold series is going online as a free-to-play kingdom building and smashing game. It’s in beta now, but the battles are fierce and fun, and anyone can join in on the pillaging.