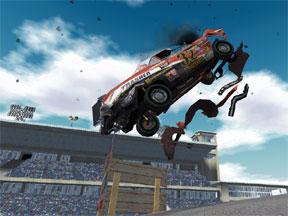 Although trying to be like industry standard Burnout 3 seems to be a new sport for game companies, Flatout never really gets out of the gate.

Ghost Master is a simulation where you do your best to scare the heck out of unsuspecting mortals. Those of you who have played Dungeon Keeper will feel right at home here. You have all the same type of irreverent humor, and you get to play on the flip side of where most games begin. Not that you are a bad guy as the leader of a ghost army, but you do have a different perspective on things. The game is divided up by a series of missions. Each mission has a goal that must be achieved, and you can … END_OF_DOCUMENT_TOKEN_TO_BE_REPLACED

When I play shooting games on the PS2 like Medal of Honor, I sometimes just wish I had a real gun to make all the shooting easier. A controller is just not as realistic as having a real gun in your hands. So it was with surprise that Empire Interactive sent in Endgame for review. Of course since we did not have a gun in the lab, they also sent along a giant green .50 Desert Eagle light gun. The gun itself is pretty interesting, and looks and feels just like a real .50 hand cannon, other than the fact … END_OF_DOCUMENT_TOKEN_TO_BE_REPLACED

Empire Interactive’s game Sheep is a puzzle/strategy game that allows us to pull the wool away from over our eyes and seek the truth. Those seemingly innocent little lambs grazing out on the open fields are exposed in this game as being former genius beings from another planet. The story goes that originally these highly intelligent aliens were sent here in disguise long ago to observe the earth’s inhabitants. Only over time these sheepish aliens lost sight of their mission and made a self-fulfilling prophecy into metamorphosing into the passive seemingly mindless creatures we think of today as sheep. The … END_OF_DOCUMENT_TOKEN_TO_BE_REPLACED