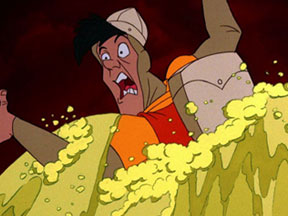 The classic Dragon's Lair game is back, and this time it uses the new blu-ray format to make Dirk and all his friends and enemies leap off the screen.

I’m sure that everyone knows about the Laser Disc game craze that took place back in the early to mid 80s (before the big crash). When Dragon’s Lair was released to the arcade masses, it took the country by storm, raking in over $30 million in revenue during the first six months. Dragon’s Lair was the creation of former Disney animator Don Bluth, whom you might know as the animator for classics such as The Secret of NIMH, The Land Before Time, An American Tail, and the recently released Titan A.E., and the game concept was developed by Rick Dyer, … END_OF_DOCUMENT_TOKEN_TO_BE_REPLACED