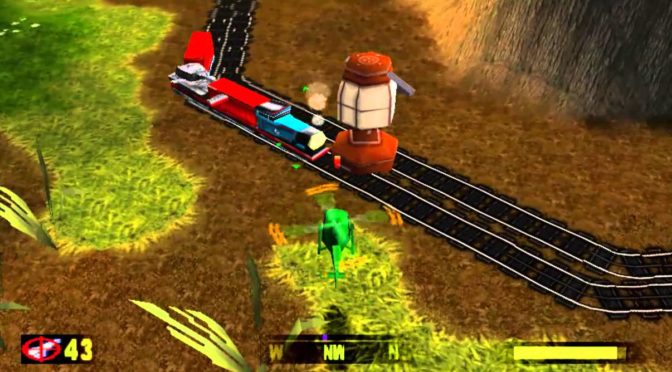 Michael’s back with a game he played a bit as a kid during the days of Video Rental stores for this week’s Retro Game Friday! It’s Army Men Air Attack!

During the time this review is being written, I am listening to a radio broadcast of today’s game between the Pirates and the Red Sox. It may only be the preseason until Monday, but I am already looking forward for this season to start. Despite only winning 72 games last year, I feel that it was still a successful campaign from the previous year’s 100-loss disaster. What I have seen last year was a significant improvement on pitching (thank Kip Wells and Josh Fogg for that, not to mention a save record season for closer Mike Williams) and defense (who … END_OF_DOCUMENT_TOKEN_TO_BE_REPLACED

Hey folks, it’s baseball season again. And means it’s time to look at the latest and greatest baseball simulations on both the PC and console platforms. Once again, I must ask the same question that I asked last year, when I reviewed High Heat 2002, and gave that game 5 Gems (actually 4 + on the PS2). Why is it that there are still a select few morons out there (yeah, I am talking to YOU, Game Informer) that still love to trash this series as opposed to weaker titles such as All Star Baseball? Deep down inside, I have … END_OF_DOCUMENT_TOKEN_TO_BE_REPLACED

What was I thinking last year? Why did I almost give up my copy of High Heat Baseball 2001 in exchange for that travesty called World Series 2K1? Fortunately when I saw WS in action, I immediately changed my mind, and stuck with perhaps the most in-depth baseball sim I ever played. However, there are still idiots out there who will pass on a masterpiece like this solely because the graphics aren’t all that great. Unfortunately the same thing can be said about this season, with High Heat 2002. I’ve called various software stores in the area, and they told … END_OF_DOCUMENT_TOKEN_TO_BE_REPLACED

The army has just finished the first production version of their latest mobile destruction center (better known as a main battle tank), the M12 Hammer, and they have put YOU in the commanders seat! Where you go from here is completely up to you! The setting is the desert of the Middle East and "It is up to you to finally eliminate the desert dictator and his terrorist army, now known as the Federation of Militant Equal Nationalists (FMEN). Good luck." With these words Gulf War, the latest tank simulation from 3DO and Military Channel, send you off into the … END_OF_DOCUMENT_TOKEN_TO_BE_REPLACED

While I have played Heroes of Might and Magic I and II, I have really not played this series extensively since King’s Bounty. In the interim I had been enjoying a similar turn based game called Warlord’s II. As you may know Warlord’s III is out, and I do have a copy and it is a lot of fun, but I was — and still am — partial to the second game in that series. I used the past tense when talking about warlord’s II on purpose. I have not played the game since my editor plopped Heroes of Might … END_OF_DOCUMENT_TOKEN_TO_BE_REPLACED

I can’t really recall my childhood really well, but I do remember playing with those little plastic soldiers. Now, while my method of play was pretty clean, some of my friends added a little bit of sadism to their soldiers: tying M-80s on their backs, frying them with a magnifying glass, you name it. Last year 3DO released a realtime strategy game called Army Men which incorporated these toy soldiers we all grew up with. While I never had the chance to play the original, I did get a chance to test out the sequel, Army Men II, which although … END_OF_DOCUMENT_TOKEN_TO_BE_REPLACED

Hybrid games usually don’t work. A game company comes up with an idea in which two different genres are combined into one game. It might be an ambitious concept, but the execution almost always falls short. Cyclone Studios decided to take a shot at this trend. They thought "What if we took the first person action of Quake 2 and combined it with the strategic elements of Red Alert?" and came up with their latest release, Uprising. In turn, not only is it an innovative idea, but it’s also a pretty enjoyable combat simulator. Rather than showing the action in … END_OF_DOCUMENT_TOKEN_TO_BE_REPLACED