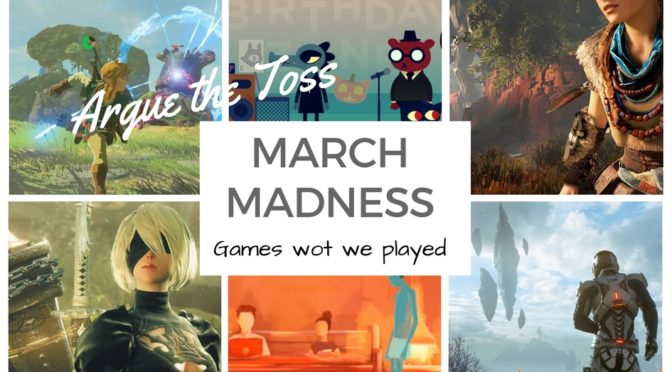 March Madness happened in 2016 – there were just too many games. It forced their hand and in a surprise move, this week’s episode of video game podcast Argue The Toss covers the obscure, niche topic that is: recent video games.

It’s not even a slight exaggeration to say that this past March saw the release of a cornucoplentiful, quantitobountiful plethorabundance of games, including several must-play 60-hour-plus open world games. Even using a super efficient and meticulously planned schedule, the ATTeam weren’t able to play everything – so they didn’t even consider making one.

Each host has been visiting a different world, with Drew making a return to Hyrule to save the usual princess in The Legend Of Zelda – Breath Of The Wild, while Chella has been spending her time slaying robot dinosaurs in Horizon: Zero Dawn and battling regular robots in NiER: Automata. They’ve also both been making trips to some slightly smaller worlds, and discuss the text-adventure horror anthology Stories Untold and the 2D-platform adventure mystery Night In The Woods.