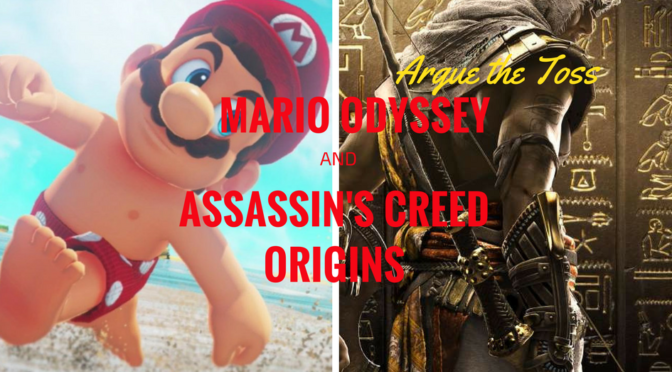 Drew and Chella talk about Super Mario Odyssey, Assassin’s Creed Origins and discuss the latest violent trailers for The Last of Us II and Detroit: Become Human.

The moons have aligned once more, and this week’s Argue The Toss is about videogames. And not just any videogames – newly released, popular videogames which you might not even have played, and maybe you haven’t decided whether you’re going to buy them or not yet. This videogame podcast might actually be of help to you, on that score.

Drew finally gets his hands on the game he bought his Switch for: Super Mario Origins, an emotionally-charged narrative adventure in which a teenage Mario struggles to make ends meet while juggling the stresses of attending plumber school and trying to grow out his wispy little adolescent moustache. Meanwhile, Chella climbs into the brand-new Ultra-Animus and quantum leaps all the way back to the 8th century BC and into Homer himself, and must battle ancient monsters then write about them in Assassin’s Creed: Odyssey.

Then it’s on to a nice cheerful postscript in which the pair discuss the new trailers for The Last of Us: Part II and Detroit: Become Human, and their common theme of horrible hard-to-watch misogynist violence. Just the pick-me-up you need during your commute. Ah well. As the old saying goes, “time spent shit-talking David Cage is fun time well spent.”