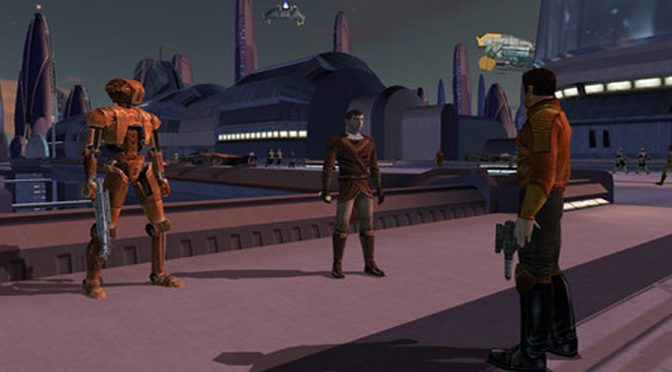 Although it’s a game that came out in 2003, Star Wars Knights of the Old Republic is as memorable as Bastila Shan’s British accent. When it comes to the graphics the game can’t be compared to today’s HD games, but it doesn’t lack what most of them lack – a good story. That’s what most game companies seem to have forgotten nowadays. Besides new content, various weapons and upgrades that give you new skins they seem to have forgotten the one thing that keeps gamers glued to their screen.

But what makes this game so great and unforgettable? Firstly, it has something for everyone’s taste. The game’s quests are diverse as are its environments. Despite the character creation is a bit limited, there are many things to do with your character when not completing quests. If you want to go for a drink or play a game of Pazaak it goes to the cantina. Unlike in the real world, in this universe, there isn’t one offline or online casino available. So if you’re looking for credits, the official currency, you can fight in arenas or help out random people that will either give you bonus experience or add more information to your story.

You also get a glimpse of how the future might look like. There’s an increased number of robots, but they haven’t taken over the world. Technology has been used to look for other planets and species. Not everyone gets along but humans and aliens have a pretty good relationship. Everyone has smartphone-like devices called com-links they use to contact each other. Much of the online stuff has disappeared so there’s no Facebook, Twitter and no 9gag.

The world itself represents a technologically advanced future in a broad aspect. Despite the average visuals, the game has a kicking story. You awake on a ship that’s under attack and you go from planet to planet to face the main villain and stop him from using the Star Forge (read Death Star) and save the day. Is that all there is to it? Of course not. You, the player, are in control of how the game’s going to end. Your decisions influence everything in the game and the way you treat certain characters will make them like or dislike you. It’s a pretty advanced concept for a 2003 game don’t you think?

In the game you’re presented with a choice: do good for the world or assume your mantle one again. Whether you’ll disappoint Mission, Carth, and Zaalbar or take up Bastila as your apprentice and become the new Sith Lord. Will you forgive Malak or give him the end he deserves? It’s all up to you.

Knights of the Old Republic is a story about making the right choices, a concept everyone’s familiar with in real life. If Revan hadn’t acted in the Mandalorian Wars he wouldn’t have turned to the dark side and wouldn’t have had his memory wiped. But when he is presented with his true past he(you) is given a choice which essentially is what life is all about. This is exactly what everyone has to face every day. The past haunts every person and the decisions people make will make them rise or fall. This message is exactly why the game has so many positive reviews today and why it will remain a classic for the years to come.