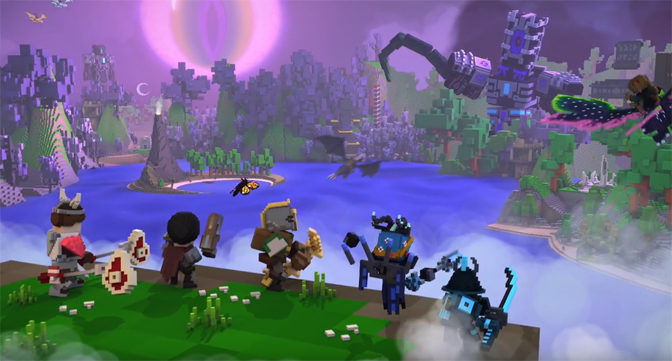 Trion Worlds welcomes PlayStation 4 and Xbox One players to the epic block-building adventure of Trove, which has become one of the largest free-to-play console releases of all time during its successful Open Beta. The massive, voxel worlds of Trove have already captivated nearly five million console players during the Open Beta, and Trion expects millions more with the official launch.

“We’re sincerely humbled by the outpouring of excitement and enthusiasm from the Trove community during its Open Beta on PlayStation and Xbox One,” said Scott Hartsman, CEO of Trion Worlds. “Thanks to those millions of supporters, Trove on console is off to an incredible start, with thousands of unique worlds being built by players and tens of millions of hours logged in the game before it’s even officially launched.”

Trove opens up a multitude of ways to set off for adventure in this voxel action MMO:

• Master 14 unique classes — Each character class has its own distinct gameplay styles and abilities, from Candy Barbarian to Boomer Ranger, Pirate Captain to Shadow Hunter.

• Build epic worlds — From enormous geodesic domes in the desert to magnificent castles in the sky, there’s no limit to the possibilities in Trove.

• Explore an endless universe of excitement — Explore fully destructible realms atop majestic mounts like centaurs and neon lightcycles, take to the ocean in the SS Dutchman ghost ship, or soar on the backs of fire-breathing dragons! Conquer untamed wilds from the Treasure Isles to Candoria, home of the sweet-toothed Candy Barbarians.

Trove is available now as a free download on the Xbox Store and the PlayStation Store.