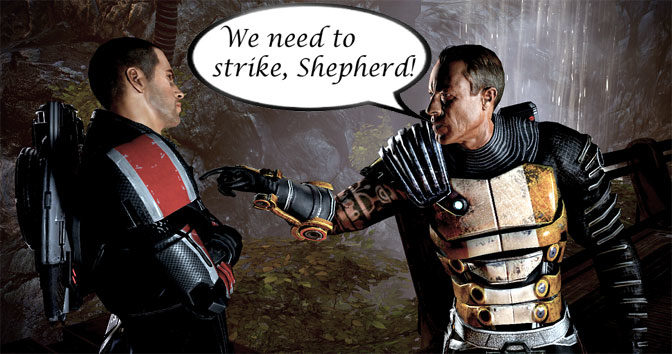 Keythe Farley didn’t know his voice was in Fallout 4 until it arrived in the stores. He didn’t even know his character’s name.

“That is not unusual in this business,” Farley said in an interview with Game Industry News. “And it is something that should change.”

Farley knows this well having done additional voices for the Call of Duty franchise and been a Voice Director for such games as Final Fantasy XV 2015 and Skylanders. He is also on strike, because in addition to his acting work Keyth Farely is chair of the Screen Actors Guild‐American Federation of Television and Radio Artists (SAG-AFTRA) Interactive Committee.

Farley is not alone, many voice actors, like Mass Effect’s Jennifer Hale, are on strike against eleven of the largest gaming publishers in the industry. The voice of Commander Shepherd and one of the most prolific voice actors in the business, Hale has given many interviews and statements on this issue.

Farely and Hale are just looking for the same protections that other actors have in the entertainment industry. This means instead of working four hours straight and putting their vocal chords though screams and other stresses, they are asking for the industry standard of two-two hour sessions. Many voice actors have to get vocal chord surgery because of the current four straight hour demands. They are also looking for better compensation. This is the biggest ask.

“Instead of just a flat fee we are asking for secondary compensation for every two million units sold,” Farley explained. “This is a ‘shared prosperity’ model of pay. If a game does really well then all can share in the success.”

These actors have really reached out to make their point. Everything from going on NPR and ABC, all the way to a robust social media campaign that promotes #PerformanceMatters on Twitter, Facebook and Soundcloud. Some notables in support are Wil Wheaton and Marcus M. Maudlin (the voice of Borderlands character Brick).

The Video Game companies are waging their own campaign to get the union to accept different terms. This coalition of nine gaming companies: Activision Productions, Blindlight, Disney Character Voices, Electronic Arts, Formosa Interactive, Insomniac Games, Take 2 Productions, VoiceWorks, and WB Games have launched a website that shows their letters to the AFL-CIO and their perspective on the negotiations.

They point out that many people, like game programmers, work long hours on video games and are not unionized. This is something that was pointed out at the recent Game Awards that was held this month in Los Angeles. It was an interesting moment that brought all the various parts of a video game in stark relief.

It occurred during the Best Performance Award. There were six actors who were up for the award, instead of the normal five because of a tie. The presenter, Founder and CEO of Insomniac Games Ted Price, pointed out that these six actors were all in three games that had been nominated for best narrative. These games were Uncharted 4, Mafia 3, and my favorite, the immersive, psychologically deep, and emotionally complex Firewatch.

The six nominees were: Troy Baker: Uncharted 4, Cissy Jones: Firewatch, Alex Hernandez: Mafia 3, Emily Rose: Uncharted 4, Rich Summer: Firewatch, and Nolan North: Uncharted 4. All had given great performances, showing that video games are a true collaborative art form like movies or a symphony or a ballet.

Nolan North, Nathan Drake of Uncharted, won and made some very controversial statements.

“I’m going to go out on a limb,” he said after thanking his wife, children and the many people at Naughty Dog. “There’s been a lot of talk about performance matters, and it does, the performance of every designer, every programmer, every artist every hard working talented person at that office. That performance is so important…their performance matters more than mine.”

Some took this as working against the strike while others saw it as a call to include all those who work in the industry to be better compensated. In other industries like the airlines, pilots, flight attendants and mechanics will sometimes strike together to support each other. Programmers, just like graphic artists, for many reasons, have not unionized.

As of December 6, 2016 the strike is still on. We here at Game Industry News hope both sides can come to a mutually beneficial agreement.