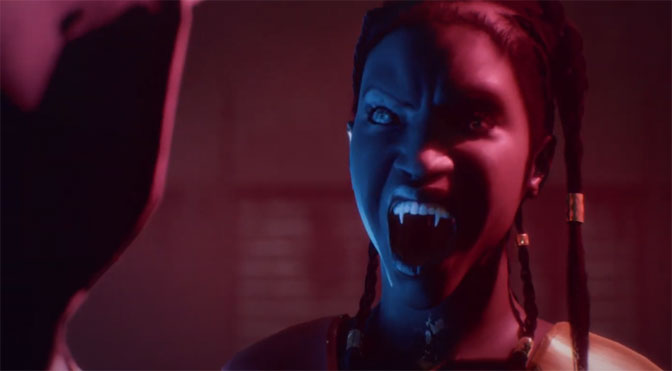 NACON and Big Bad Wolf Studio are pleased to introduce the third and final playable character in Vampire: The Masquerade – Swansong in a new trailer.

Galeb and Leysha, the first two heroes introduced, today make way for the third playable character in Vampire: The Masquerade – Swansong. In this new video we meet Emem. Although she looks like a young woman with magnetic charm, this vampire is actually 100 years old. A former jazz diva, she now belongs to the Toreador clan after having been transformed by Hilda, the love of her life.

The video depicts an attack in the streets of Boston, but the prey is not necessarily the one who seems to be the weakest… Emem ultimately reveals her powers, from the Disciplines of Celerity and Presence, which can make her virtually invisible.

In this narrative RPG adapted from the 5th edition of Vampire: The Masquerade, the player takes control of 3 vampires belonging to different clans of the Camarilla, the secret society to which most vampires belong. Weaving between their intertwined tales, the player has to confront the different points of view of his characters to unravel fact from fiction. With whispers of conspiracy, murder and power struggles, the player must protect his clan, discover the truth and above all enforce the Masquerade, the vampire law designed to conceal the existence of creatures of the night from humans.