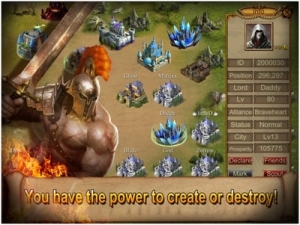 IIlead Software recently announced the release of their latest strategy game. Fight with millions of players from around the world in Conquest & Glory, an exciting evolution in fast-paced strategy gaming.

For the first time, players can enlist Historic Heroes with legendary powers in an all-new mobile experience. Recruit a talented hero for fierce battles with friends and other players. Recruit a hero to inflict devastating siege attacks on kingdoms that stand in your way. Make sure you train someone to bravely repel anyone foolish enough to attack your walls.

In Conquest & Glory you can construct a variety of desirable buildings involving exciting strategy that lets you explore an open world. Construct barracks to train armies, the future sword of your glorious empire. The Academy unlocks a wealth of knowledge and research to aid you in your conquest. Raiders who want to pillage your trade routes will think twice after you research how to train those war elephants!

Adorn your Lord with the finest Gear and Gems that increase their ferocity and prowess in battle. The finest ruler should ride the finest steed and carry the finest weapons. Explore a wealth of gear combinations and upgrades that adds power and versatility to any army.