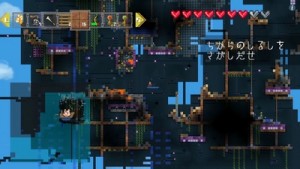 In Airship Q players go on an adventure in the open sky with your original airship. The witch has transformed you into cat, and kidnapped your brother Lemuel. Now, you have to search her in order to get back to yourself. You will explore mysterious islands, collect materials, craft tools, and fight against monsters! Find statues on the way to increase your crafting levels. You can create your airship as you like, equipping with weapons to get ready for battles. Plants grow on the wet soil, water flows with gravity, and rocks are formed by the cooling of lava. The game makes use of the laws of physics and you are challenged to use your creativity. Multi-Player mode supports up to 4 players.

Airship Q has already proven a successful title, and reached its target goal in less than five hours through Makuake, a Japanese crowdfunding platform, and has also won the 4Gamer’s Award for Excellence in the Indie Game Division at the Tokyo Game Show 2014.

Airship Q will be available on PlayStation Vita and PlayStation 4, and is tentative scheduled for release sometime in 2015.

One thought on “Trailer: Airship Q”