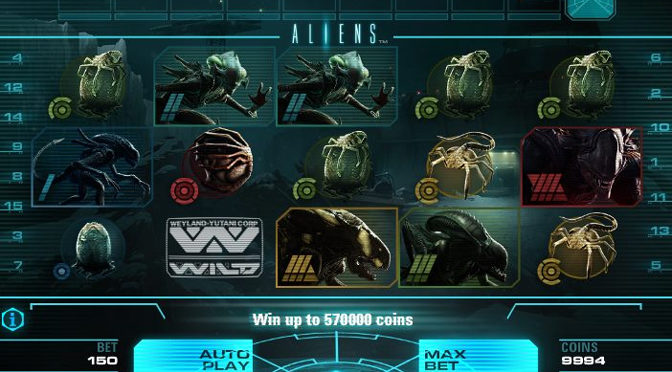 Leading developers of online casino games go to great lengths to catch the eye of prospective customers. NetEnt is one of the main providers of software for the gambling industry and they develop some of the best looking and best paying slots. Some of their titles are so successful that they almost cross the thin line separating modern slots from video games for consoles and PCs.

One prime example is NetEnt’s 2014 Aliens slot which is far from being your regular slot, where you spin the reels and hope to trigger a winning combination. The attention paid to the visuals and the sheer complexity of the gameplay makes it a great choice for videogames players with a keen eye for gambling. It is inspired by the eponymous sci-fi action horror movie of the 80s and features three distinct game levels and fancy 3-D graphics.

More Than Meets the Eye About Aliens

The video slot looks and feels great, but these are just a few of the arguments in favor of checking it out. Casino players are more interested in the payouts and with Aliens video slot having a 96.4% ratio, it is one of the best paying slots in the industry. Just like conventional video games, it has a short tutorial helping players who spin its reels for the first time.

The game has five reels with three rows and 15 fixed bet lines and the reels are populated by regular, wild and scatter symbols. Players can bet an amount ranging from € 0,01 to € 1,00 and there is an indissoluble link between the coin value and the potential returns. Wild symbols can substitute any other signs and they are responsible for creating the highest possible winning combinations on an active pay line.

Setting the Trend for the Future

NetEnt’s Aliens has three distinct levels, with the first one being the main game and it is called “The Search”. Players are tasked with collecting as many multiplier symbols and nine of them will trigger the beginning of the second level, “The Encounter.” During this phase, players collect randomly generated Ammo Clips and kill as many aliens as possible without running out of shells. Level 3 is “The Hive” and it dares players to kill the Queen Alien and her eggs to collect the bonus coin win of 240 times the bet.

In many regards, NetEnt is a pioneer of the online casino industry and it keeps innovating. Aliens was among the best looking games back in 2014 when it hit the stores and the latest releases are just as good. Many software developers have followed suit and their own games feature better graphics and more compelling gameplay. This trend is here to stay and video slots are expected to look even better in the future, in an attempt to attract more players who enjoy video games.