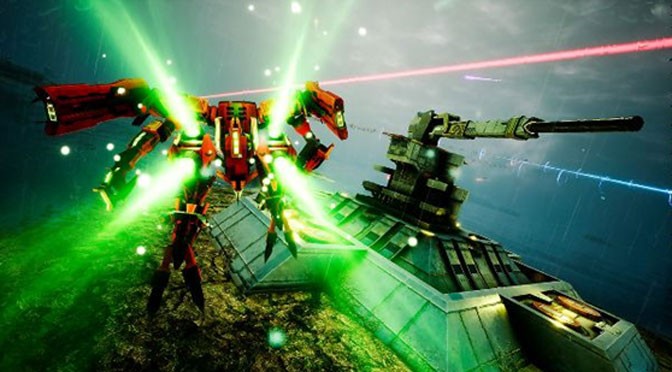 Japanese publisher GameTomo today announced that Project Nimbus: Complete Edition is now available on the Nintendo Switch eShop. Project Nimbus is a high-flying action mecha game inspired by classic mecha like Macross and Gundam as well as games like the Ace Combat series. The Nintendo Switch version features content that has never been released in Western markets, a move sure to delight its cult of followers in Europe and North America. The game is available on the Switch’s eShop for 15.99 GBP, 17,79 EURO, and 19.99 USD with a special 10 percent discount for the first week to celebrate the launch of the title.

Project Nimbus: Complete Edition features pulse-pounding, high-speed combat across a variety of theatres of war across a futuristic Earth. Three main factions duke it out for control over scarce resources using Battle Frames, powerful combat suits that can field a diverse array of fantastical weapons. New to this release is the enhanced Survival mode that pits players against never ending waves of enemies, challenging them to succeed against impossible odds. But hey, if you are looking for better odds, you need to try www.bestcasinosites24.co.uk for some of the best gaming around.

The new WARFRONT mode further elaborates on this formula by adding multiple objectives and missions to the survival gameplay, forcing the player to make tactical decisions as they rise through the ranks.

The launch trailer for Project Nimbus highlights the breakneck speed of its combat, the variety of its locales, and the strength of its exotic weaponry. Character dialogue ups the stakes as the game draws you into the heart of the conflict between the last organized states on Earth and their struggle to survive against each other.