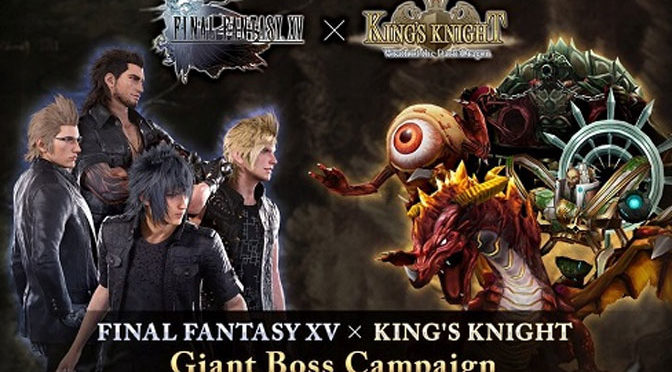 Three decades after its original release in Japan, the legendary 8-bit scrolling shooter King’s Knight is back as KING’S KNIGHT –Wrath of the Dark Dragon–, Noctis’ favorite pastime from the FINAL FANTASY XV is now available for mobile devices.

KING’S KNIGHT –Wrath of the Dark Dragon– is the vertical scrolling shooter game that appears throughout the story of FINAL FANTASY XV. The title is based on KING’S KNIGHT, which was initially developed by SQUARE for the Nintendo Entertainment System in 1986 by Hironobu Sakaguchi and Nobuo Uematsu. [amazon asin=B00DBF829C&text=Pick up the Game of the Year Final Fantasy XV from Amazon today!]

This modern version features a brand-new story and world where players must defeat enemies while simultaneously destroying obstacles in their path. The game includes more than 100 new quests, dozens of new obstacles, enemies and traps, job elements and co-op multiplayer support for up to four players. Fans and a new generation of players will be challenged by a level of difficulty that remains true to the original game.

Players can also join Noctis and others characters from FINAL FANTASY XV to vanquish giant enemy bosses by sharing to sites like Facebook and Twitter to reduce their HP in the FINAL FANTASY XV x KINGS KNIGHT Giant Boss social campaign. Running through September 29, fans can defeat as many bosses as possible to earn greater in-game rewards. More information about the Giant Boss campaign may be found here: http://campaign.formationrpg.com.