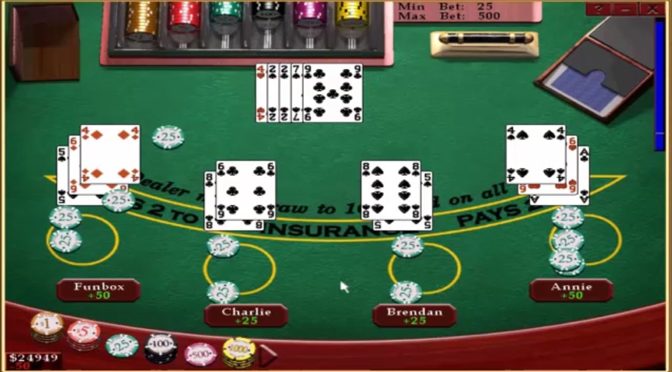 There are many games in the world of casinos you can play, each one with its own set of advantages and disadvantages. Some, like roulette, are easy to play – you place a bet and hope for the best when the ball rolls out. It’s a game of chance with no skill involved which isn’t the case with blackjack. A long-reigning card game played by millions around the world, blackjack is the most widely played casino banking game in the world. It’s also the favorite of major movie stars such as Ben Affleck that aren’t shy on spending thousands in Vegas casinos.

Unlike roulette, blackjack is a game of skill, although luck still plays a part. The good news is that you can apply a couple of blackjack strategies to cut the house edge and play in more favourable conditions. The bad news is that many blackjack strategies rarely work. There’s one famous strategy in particular every casino player knows about that is considered highly profitable if you train hard enough. However, it’s also illegal if you get caught.

The strategy in question is card counting. Often glorified in Hollywood movies and seen as a sure way to earn money from the game, it’s not that much of a strategy but a technique. It has been used more than once to win astounding sums of money, most notably by the legendary team of MIT students who won millions in their card counting days. Of course, their luck didn’t last just like the hundreds of other times when card counters were banned from casinos.

What is Card Counting?

Primarily used in the blackjack family of casino games, card counting is a technique used by advantage players to reduce the casino house edge and beat the dealer. It involves keeping a tally of high and low cards seen by the player. As such, it requires tremendous focus and your best poker face on, since, you know, you’ll be escorted out of the casino with empty hands if you’re caught red-handed.

Basic card counting assigns a negative, positive or zero value to each card. Low cards increase the running count (tally), while high cards work the opposite way. As expected, cards with a zero value do nothing. The goal is to give all cards point values that correlate to their Effect of Removal from the deck. In short, it’s the estimated effect of removing a card from play and how it affects the house edge.

Without getting into all the details, it’s a complex technique not suitable for starters. Blackjack vets can earn off it, of course, but make no mistake – casinos aren’t open to the idea of you counting cards.

That’s the million-dollar question. In many cases, it brought blackjack players massive sums of money. However, its popularity led to a card counting ban in many casinos so you can’t use it freely. Become a master card counter, however, and who can say that you’ve used it illegally to beat the dealer?

There are many myths associated with card counting that obscure its value. For example, it’s a myth that all card counters win. Unlike Ray Babbitt in the cult-classic Rain Man, you’ll most likely lose several hands even if you are successful with it. It’s a very risky strategy, however, and requires math skills that go far beyond the basics.

If you’re asking us if card counting is a viable blackjack strategy, we’ll have to go against it. Sure, it can bring you a nice profit, but what’s the point if the casino catches you and sues you? Stick to blackjack guides and you’ll eventually become a master – you can then use the knowledge to legally beat the dealer.