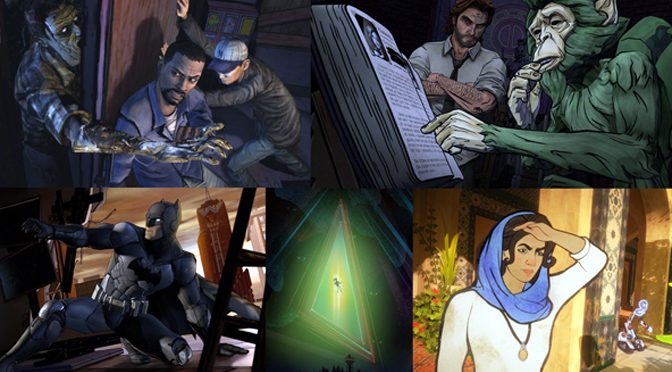 Fans of story games won’t want to miss this! The Humble Summer Adventure Games Bundle has just launched with the acclaimed Telltale series The Walking Dead, The Wolf Among Us, and Batman, along with IGF winners Oxenfree and Heaven’s Vault. The bundle will be available on HumbleBundle.com through July 21: https://www.humblebundle.com/games/jdrf-adventure

A percentage of all bundle sales will support JDRF, a global nonprofit that funds type 1 diabetes (T1D) research in pursuit of new treatments — and, ultimately, new cures — for an autoimmune disease that affects up to 38M people worldwide.

This cause is personal to Dan Connors, who founded Telltale in 2004 and has a 12-year-old son who lives with T1D. Dan crossed paths with JDRF in 2017 when he selected the charity as one of the beneficiaries of a Humble Bundle that went on to raise over $1.6M. He has since taken on a volunteer lead role with JDRF’s Game2Give initiative, helping to identify fundraising opportunities within the game industry and to build a community of game developers and players with T1D connections.

“Since COVID-19 has all but shut down in-person fundraising, this bundle is critical in ensuring JDRF’s important work can continue,” Dan says. “I’m grateful to Skybound and to the new owners of Telltale for bringing The Walking Dead, The Wolf Among Us, and Batman together again, as well as to Night School Studio and Inkle for offering their brilliant games in support of JDRF. And to everyone who pitches in to help fund the research that will someday allow my son and millions of others to live free of the burden of type 1 diabetes, thank you!”

Starting this Friday, JDRF will feature several games from the Humble Summer Adventure Games Bundle on their Twitch channel (http://www.twitch.tv/jdrf) with help from content creators AverageSiege, DarkInsanities, CalebratedGamer, and MissRogueFlame. All four have connections to type 1 diabetes and were among the 60+ participants in JDRF’s inaugural livestream fundraising event, which took place over a week in November 2019 and raised about $37k for T1D research. JDRF Game2Give’s next big Twitch fundraiser is scheduled for August 7-16.

Game developers, publishers, players, and streamers who want to get involved with JDRF Game2Give can visit http://www.jdrf.org/gaming