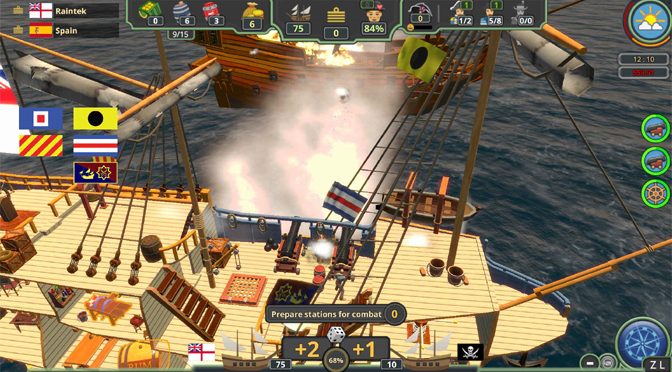 Her Majesty’s Ship, a game that allows you to manage a military sailing ship and participate in 18th century naval battles, is debuting on Nintendo Switch. In Her Majesty’s Ship, the player takes on the role of an ambitious officer, whose good service in the British Royal Navy can even lead to achieving the rank of Admiral of the Fleet. The digital launch of the game (Nintendo eShop) has been set to September 15th this year.

Her Majesty’s Ship is developed by Every Single Soldier, a studio specializing in unique war games. The title premiered on PC in July 2019. Ultimate Games S.A. is responsible for converting and publishing the game on Nintendo Switch.

The player becomes a British navy captain, who must both take care of the ship and crew, and carry out the command’s orders. In the main story mode, the goal is to achieve your dream rank: Admiral of the Fleet. The creators focused on clear 2.5D graphics full of bright colours. The game itself is played in real time, which requires focus and quick reactions.

“Every Single Soldier’s game transports us back to the fascinating realities of the 18th century, when the struggle for dominance on the seas and oceans was basically even more significant than today. What’s more, these were times when not only oceanic powers, but also pirates engaged in naval battles. Naturally, Her Majesty’s Ship doesn’t lack these themes, but managing the crew and taking care of our ship’s condition is also very important” – says Rafał Jelonek, COO at Ultimate Games S.A.

As Rafał Jelonek stresses out, this strategic/economic British navy ship simulator offers a unique approach to the subject. In Her Majesty’s Ship key importance is placed on – apart from naval battles – managing the crew’s morale and skills, as well as all matters related to the ship’s supplies and condition.