Italian developer Affinity Project is teaming up with well-known animal welfare organization Best Friends Animal Society to end the killing of animals in shelters around the United States with a new mobile game, Don-Ay: Pet Rescue.

An elegant mix of virtual pet simulation/endless runner gameplay and real-life donations to a worthy cause, Don-Ay: Pet Rescue will soon be available on both the App Store and Google Play. Check out how the donation mechanics work in the explainer video below:

The world’s first in-game donation platform, Don-Ay allows compassionate gamers to make donations to causes dear to their hearts – which is made possible by Affinity Project’s partnerships with non-profit organizations (NPOs) such as Best Friends Animal Society.

In Don-Ay: Pet Rescue, every action – including watching an ad or purchasing in-game items/currency – will generate a donation outside of the game. Soon, players all over the globe will be able to help homeless animals through Best Friends as they cuddle, feed, bathe and groom their virtual pets; Pegi the Dog and Silver the Cat also get to hop on a cloud and fly across a variety of picturesque Dream Worlds! 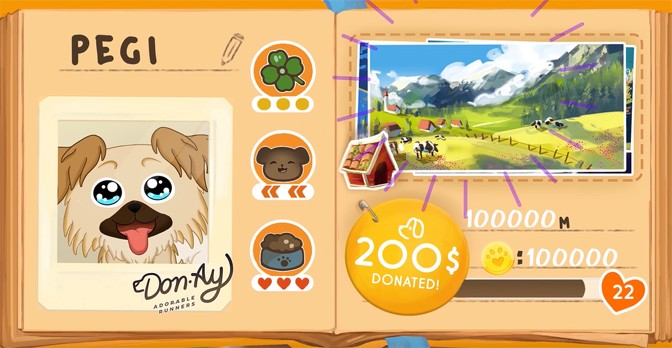 “Don-Ay: Pet Rescue was born out of a chance meeting between two friends and an abandoned animal looking for a home. This sparked the idea for a game that allowed players to seamlessly donate to amazing non-profit organizations such as Best Friends Animal Society. With Don-Ay, players can help animals in need wherever they may be – effecting change in the real world one pet at a time.” – Ivan Paris (CEO, Affinity Project)

“We are thrilled to work with Affinity Project. The donations generated from this activation have the potential to impact the lives many of the dogs and cats in our care.” – Eric Rayvid (Director of PR, Best Friends Animal Society)

Based in Lombardy, Italy and founded in 2017 by game designers Ivan Paris, Roberto Ressi and Diego Ricchiuti, Affinity Project is an ambitious studio made of young professionals who want to make the world a better place with actions – not talk. Additional team members include artists Sarah Damo and Federica Fringuellini, composer Danilo Arrigoni and programmers Tommaso Bassini, Carlo Simetti, and Cristiano Piromalli. To learn more about Affinity Project and Don-Ay, please visit http://www.affinityprj.com and http://www.don-ay.com.