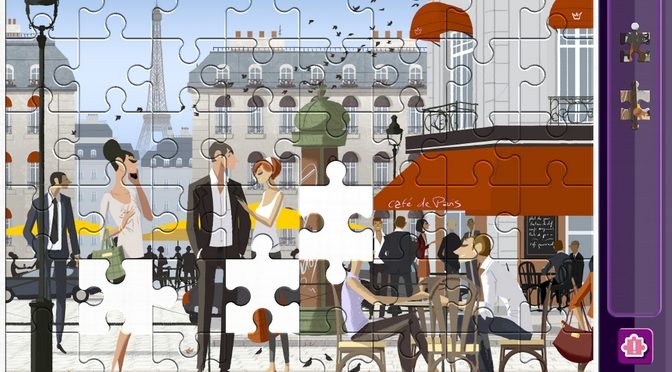 Happy Square Studio, a Canadian games studio, today announces the launch of Jigsaw Story, a new mobile jigsaw-puzzle game packed with art, short stories and music. Aimed at women gamers, the new release hopes to ensure a fun and de-stressing experience for all of its users.

Happy Square Studio is a Canadian company that focuses on creating great mobile games just for women. The company believes firmly that apps should be delightful, relaxing, and beautiful. Jigsaw Story is a game made for women, by women. Many women don’t consider themselves as gamers but Jigsaw Story is here to fix that perception, encouraging women to unwind with entertaining games on their smartphones.

“The reason that I created this app is because – as a woman in my thirties – I didn’t feel there were too many games or apps that I wanted to use after a long day of work,” explains founder Jenna Li. “I get stressed out fairly easily and I find competitive gaming and certain game mechanics too stressful or too costly. After talking to many women, I realized that they felt the same way. That’s why I launched Happy Square Studio.”

Jigsaw Story partners with world-famous artists for its jigsaw puzzles. These include the likes of Pascal Campion, a leading digital artist with more than 400,000 followers on Facebook, Lucy Truman, the illustrator of Confession of a Shopaholic series book covers, and Robert McCall, the NASA illustrator who also designed the original movie poster for 2001: A Space Odyssey. The game includes calming and storytelling elements for a more integral experience that helps users de-stress after a long day of work. Over 60 percent of the team behind Jigsaw Story are women, with the whole effort focused towards the needs of women gamers.

Mobile gaming generated 37 percent of global gaming revenue in 2016, a market with a total worth of $99.6 billion. This was a significant increase of more than 8 percent, based on figures from 2015, showing gaming’s demonstrable rise as a mode of revenue generation. Jigsaw Story and Happy Square Studios focus on the female demographic in a market that is traditionally dominated by male tastes.

“Many women don’t play games at all because they don’t want to feel rushed, or get too competitive,” Li continues. “They prefer apps that are simple, relaxing, and artistic that do not require too much learning upfront. This app was really designed for women, by women, with simplicity and minimalism in mind. We tried to keep the UI easy to follow and artistic. We are also very selective on which artists we work with.”

Jigsaw Story is currently available on both the Apple App Store and Google Play, and is free-to-play. The game supports in-app purchases of individual puzzle collections, backgrounds and music customizations.