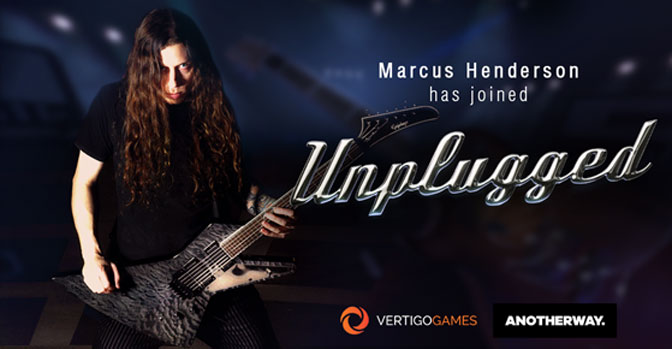 Vertigo Games, the VR specialist publishing and development arm of the Koch Media Group, today announced that the award-winning music game designer Marcus Henderson who is best-known from his work on the Guitar Hero series has joined up with Anotherway and Vertigo Games to work on the upcoming VR music game Unplugged.

Unplugged is a VR music game that uses novel and quality hand tracking technology to make you feel like a musical legend on a virtual stage. With experience working for the likes of RedOctane and Activision on several music games, including most notably the Guitar Hero and Rockband franchises, Henderson makes a great addition to the Unplugged team. A lifelong guitarist and game designer, Henderson is known for the authenticity and exhilarating sense of realism that he brings to the gameplay and user experience in music games.

“I’m thrilled to be joining the Vertigo and Anotherway teams on such an amazing and exciting new game,” said Henderson. “Music games and VR are a perfect match and the team has crafted a true love letter to guitar and rock music in general with Unplugged. We can’t wait to get it into your (virtual) hands later this year!”

“We are absolutely thrilled to have Marcus on board. Not in our wildest dreams did we imagine that we would have a Guitar Hero legend on our team!” said Julia Casal, Producer at Anotherway. “Marcus dove right into the project from the very beginning. It’s amazing to see how the game has grown in such a short time, thanks to his efforts on brand partnerships and his game design experience. His love for rock music and passion for the game has brought even more energy to our dev team. He is the perfect ambassador for Unplugged.”

Published by Vertigo Games and developed by Anotherway, Unplugged is coming to VR in Q3 2021.