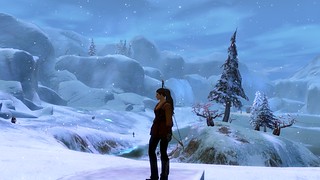 Games have become so much more than just a way to pass the time, they are now used as ways to live another life. You can take on the role of a totally different character, and do things you wouldn’t be able to do, or even dream of doing in the real world. For instance, as Lara Croft in Tomb Raider you can visit ancient crypts and solve complex puzzles, or as Venom Snake in Metal Gear Solid V you can infiltrate enemy bases in Afghanistan. Online multiplayer modes are becoming vastly more intricate as well, and one of the primary objectives of the gaming sector now is to create totally immersive online experiences. This can give players an unrivaled form of escapism.

The online casino sector is trying to negate the need for users to visit the real-world casino by providing a fully comprehensive and engaging experience straight to people’s tablets or laptops. This is done by offering live links to real croupiers that deal the cards in blackjack or spin the wheel on roulette. Even slots are becoming more involving, and have advanced massively from the days when players just had to spin the reels and hope to land matching fruit. Now online slots have superb graphics and intense soundtracks to bring you right into the action and make you feel as though you have traveled to an ancient world.

MMORPGs are the ultimate immersive gaming experience for many, as they not only allow you to take on the role of a different character, they enable you to enter entirely different universes. In Guild Wars 2 which is played by over 7 million people, for example, players enter the mythical world of Tyria and create their own hero. They then have to set about crafting tools to build communities, venture out on quests and defeat enemies. But it’s not simply about doing these things, you also have to interact with other users. It can be a great platform for socializing and making friends. What’s more immersive than that?

Console game developers have looked to these MMORPG worlds and started trying to provide their users with a similar scenario. GTA V Online (see advert above) was a hugely successful example of this, where players had a sprawling online mode that was completely separate from the actual story. Players were still occupying the fictional city of Los Santos, but they could see other online players as they went about their business. It also opened up collaboration between users in various mission situations. The game has sold over 75 million copies, which underlines just how popular this new form of playing is.

Games are set to get even more immersive in the near future, as developers scramble to create content for virtual reality. In the iGaming sector Microgaming has already come up with VR Roulette, and ORBusVR is a fantasy MMO designed for Oculus Rift and HTC Vive. It might not be too long before gamers are putting on full VR suits and actually walking around in these fictional gaming worlds. These are truly magical times.