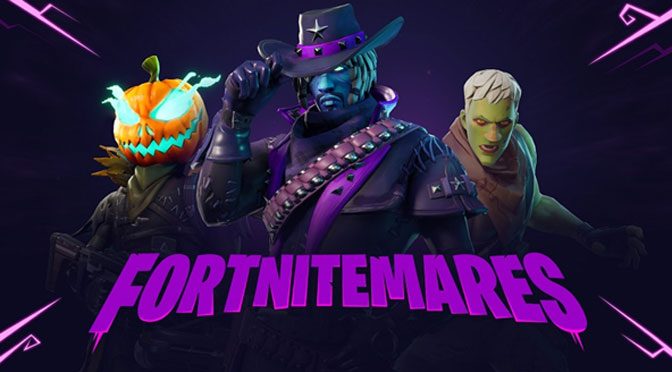 Fortnitemares 2018 is here, featuring all manner of haunting happenings across Fortnite. Skulk in the shadows to scare your way to a Victory Royale or brave hair-raising husks to complete the weekly new missions. Darkness has risen.

During Fortnitemares, you’ll face off against Cube Monsters in a whole new way of playing Battle Royale. Cube Fragments have now appeared on the map and they’re spawning monsters!

There are new weapons to fight back against these creepy creatures, like the Six Shooter and Fiend Hunter Crossbow. Take out the Cube Fiends and Fragments to pick up loot, and survive against enemy players.

Fortnitemares has its own set of free challenges; there are new challenges every few days with new rewards! Players who complete the final set of challenges will be rewarded with the Dark Engine Glider!

Additionally, the all-new “Deadfire” outfit is available to purchase in the store. This unique outfit is a new type of outfit that features in-match progression. The outfit will progress through 2 styles based on the damage players deal enemies (other players and AI) and how long they last in a match. Deadfire also comes with the Shackled Stone Back Bling, and players can pick up his matching Dark Shard pickaxe in the store — both of these are reactive cosmetics.

The spooky scenery of Hexsylvania has returned! This includes multiple sets of story quests and new rewards, including the Rat Rod Weapon Set, spooooooky Llamas, and a few more surprises along the way.