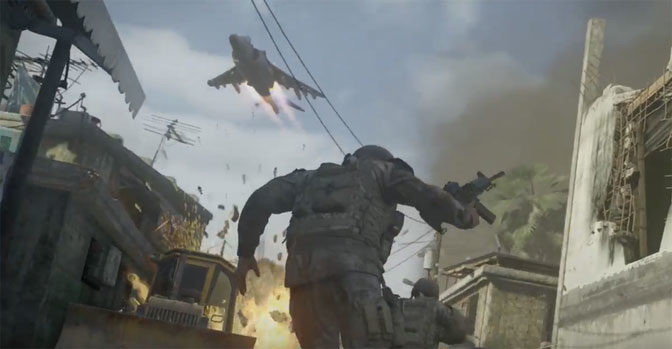 Activision announced today that Call of Duty: Modern Warfare Remastered, a complete enhancement of one of the most critically-acclaimed games in history, will be available as a standalone release on Tuesday, June 27th, first on PlayStation 4 in stores and via download on the PlayStation Network, with other platforms to follow. The game includes the full campaign and the 16 multiplayer maps fans know and love from Call of Duty 4: Modern Warfare, all released with stunning high-definition visuals.

“It’s been an honor to bring this great title, which holds such a special place in our hearts, to a new generation of players,” said Brian Raffel, studio head of Raven Software. “With Modern Warfare Remastered, we’re able to relive our favorite campaign levels and multiplayer moments in full HD visuals and remastered audio. No detail was too small, as the team pored over every aspect of development.”

In celebration of the Call of Duty: Modern Warfare Remastered launch, players will also be able to participate in the newest seasonal Call of Duty event called, Call of Duty “Days of Summer.” The five-week community celebration begins June 27th and will feature a bevy of in-game giveaways, XP events and new playlists across multiple titles, including a new summer-themed map for Modern Warfare Remastered that will be available through the duration of the event, along with much more to be announced on Tuesday.

Call of Duty: Modern Warfare Remastered features fully improved texture resolution and detail, revamped animation, remastered audio, and much more. Fans will relive the full, iconic story campaign as they’re transported around the globe with Capt. Price, Gaz and Soap across all the missions from the original game, including “All Ghillied Up,” “Charlie Don’t Surf,” and “Crew Expendable.” Players will also experience the online multiplayer mode that redefined Call of Duty by introducing killstreaks, XP, Prestige and more, and battle head-to-head in the fan-favorite maps from the original multiplayer mode, including classics such as “Crash,” “Backlot” and “Crossfire.”