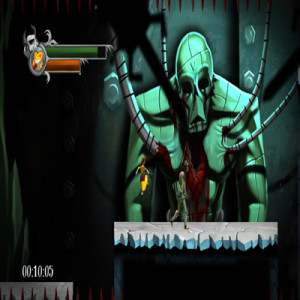 Developer Scientifically Proven’s Blood of the Werewolf is making its console debut on the Xbox Live online entertainment network for Xbox 360 games and entertainment system from Microsoft later today. Spinning a tale of persecution, tragedy and revenge, players take to the streets in human and wolf form for a night of blood-soaked vengeance. Follow along with Selena as she takes on Dr. Frankenstein and his coalition of monster-movie icons who will stop at nothing to destroy her and her son. This updated version features new content, fine-tuned for console at a special price of only $6.99.

Brought to you by Midnight City, Majesco Entertainment Company’s (NASDAQ: COOL) independent digital label, Blood of the Werewolf is a heartfelt love letter to hardcore platformers of days past. Scientifically Proven asks players to take a trip back to an era when timing, precision and a fist full of quarters were all we needed to play. Building on the success of the PC/Steam version launched last Halloween, Scientifically Proven went back to the drawing board to add in two new content modes for consoles. Endless Challenge Mode is a series of procedurally generated challenge rooms that put player skills to the test, without the benefit of memorization. Each room offers new traps and configurations meaning no two runs are ever the same. Score Rush mode drives players to take on all ten levels (and five boss battles) to get the highest score and compete against friends for bragging rights. All of this on top of the already robust Story Mode, featuring 10 levels and five dedicated boss battle arenas. As a special thank you to PC players, all new content modes will be made available as a free update.

Blood of the Werewolf centers on Selena, a woman leading a dual life as a loving wife/mother and one of the last surviving werewolves. Her husband murdered, her child kidnapped, Selena sets out with nothing more than a crossbow and a thirst for vengeance. Experience dynamic gameplay using Selena’s crossbow to thwart enemies from a distance while bringing the fight up close and personal in werewolf form by instantly transforming in light of the full moon. Full air controls add to precision jumps, with a special double jump for werewolves only. Fully upgradeable weapons and hundreds of hidden collectables await you along your journey to help Selena in her battle. Keep an eye out for secret areas to discover ancient talismans and unlock the true potential of your werewolf abilities. Online leaderboards track your best time, number of deaths and level ranks to support a little friendly competition. Don’t forget to keep your eye out for fireflies; they often lead to special hidden surprises!

Blood of the Werewolf is rated T and will be available today on Xbox Live for Xbox 360 at the low price of only $6.99.