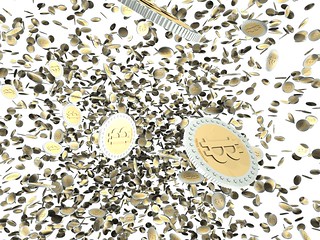 Bitcoin is the digital currency that is taking the world by storm, and recent developments show that it could soon be the top form of payment for all things online. Huge companies like Dell and WordPress already accept the cryptocurrency, while there are also sites which have opted not to operate in other currencies altogether. Bitcoin seems tailor-made for the world of gaming, as gamers from all four corners of the planet now meet up in the same virtual locations.

Within the online casino sector, some sites have already chosen to give players a full Bitcoin experience. Slot games are hugely popular online, but a lot of the online casinos house the same games like Immortal Romance and Thunderstruck 2. Playtech and Microgaming are the two biggest slot machine providers and their games can be found practically everywhere.

For gamers looking for fun slot machine games online with a twist, Bitcoin casinos could provide a different experience. There are now unique slots games that are specifically designed to be played with Bitcoin. Games like the Catfather Part 2 and Jade Treasure can only be found at Bitcoin sites, meaning that fans of the spinning reels will have to experiment with Bitcoin if they want to play them. If Bitcoin casinos surge in popularity, the likes of Playtech and Microgaming could be swayed into making their games playable with the e-currency.

Console gamers may also welcome a move towards Bitcoin. Currently, PS4 players can link up their PlayStation accounts to their bank card or PayPal to pay for new games and items within games. Unfortunately, though, fluctuating exchange rates can often make these purchases more expensive for gamers in certain countries. Take for example the Brexit result in the UK that caused the pound to plummet in economic markets. UK players then wanting to buy games from Asian developers, for example, would have had to pay more than before as the Japanese Yen surged. In these cases, if the players’ accounts had been linked to Bitcoin- which actually went up in value after the referendum as well- their gaming payments would not have been affected.

Microsoft may have the edge over PlayStation here, as they already accept Bitcoin payments on the Xbox and in the Windows Store. The popular gaming platform Steam also accepts the e-currency, indicating that Bitcoin could soon become more predominant in gaming markets.

Virtual Reality could also serve to boost the need for a sole gaming currency. Gamers from all over the planet already occupy the same virtual spaces in hit MMORPGs like Guild Wars 2, but this should happen more once virtual reality takes the world by storm. Mark Zuckerberg has divulged plans to create virtual chat rooms on Facebook, and online casinos seem to be ready to make the switch to VR with Microgaming’s VR Roulette leading the way.

Physical money is all well and good in the real world, but it is about time the online world had its own virtual currency. For gamers, it would make things a lot simpler. Imagine a UK resident and a Japanese gamer in the same virtual chat room. They want to play a game together. Which currency would they use? The universal currency of Bitcoin would be ideal for this situation – all players would pay the same and in the case of casino games, all winnings would be relatively equal. The internet has helped the world’s boundaries to disappear. This means that a singular currency for the online universe is essential.