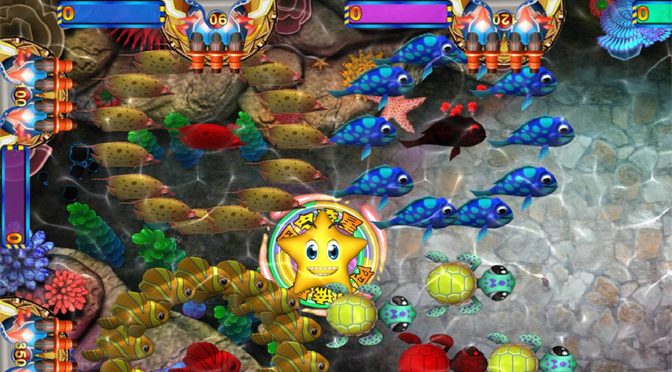 The online gambling business has embraced all of contemporary technology’s creative concepts. As a result of these considerations, today’s players may enjoy a broad range of fantastic card and table games. The traditional favorites like Blackjack, Roulette, and Poker have grown in popularity, but so have new kinds of gaming games.

Fish table games are the latest games to grab the casino industry’s attention. According to experts, the fish table game initially gained popularity in China over a decade ago. Since that time, these thrilling casino games have been launched almost everywhere on the planet.

The fish table game is typically a traditional arcade-style shooter. It features a screen placed on a football-style table where several players may shoot fish as they swim around it. Players use a joystick to fire at the big fish swimming around on the screen. You will also use the stick to choose which fish to shoot.

The fish come in a variety of sizes and colors, each with its worth. Although some of the characters on the fish game table have comparable point values and are shown on the machine’s game sticker, others have different point values. The bigger the reward, the rarer and more difficult a fish is to catch.

Capturing a particularly uncommon kind of fish will give you extra points, and pressing the weapon button will raise the point value of each shot. You can choose from several weapons and aim and fire using a joystick and a two-button combination. You earn points while playing that you can later exchange these points for real money.

When playing this game, you purchase bullets and then use them to shoot the fish. For in-game purchases, you will need real money. However, you can always trade the coins for money; thus, capturing the rarest fish gives the player extra money. The game features a vibrant soundtrack, distinctive UI, 3D visuals, and eye-catching colors.

Developers have added animals like giant crabs and sea dragons to the mix to offer even more thrill to the action. You earn the greatest points when you kill these deep-sea monsters.

In the United States, the Fish Game Kings of South Carolina is one of the market leaders. They were the first to have thicker wiring, high-quality speakers, and a sufficient power supply to avoid burnout of their equipment. Their top fish table games are Poseidon’s Realm, Crab Avengers, Jackpot Fire Kirin and Masters of the Deep.

One of the most popular games in the Philippines, Fisherman Gold, is a product of SimplePlay, a subgroup of SA Gaming.

Fish Catch, one of the favourite online fish gaming choices for US gamers, was launched in 2018 by Atlanta-based interactive gaming pioneer Realtime Gaming. The Fishing Kingdom by NetGame, Fish Hunter by Eurasian Gaming, Fish Hunter by Amazing Gaming, and Spicy Fishing by PlayStar are other popular online fish games.

Betsoft, a prominent 3D online slot producer headquartered in Malta, has also dabbled in this genre with its Max Quest series. In such games, though, you don’t get to shoot fish; instead, you get to shoot hordes of the magical and undead creatures.

Thanks to Fish table games popularity and recent advancements in technology, the games have been incorporated on computers and mobile devices.

Although talent is a minor component, it tends to have a significant impact on results. As a result, fish table games are the closest to a multiplayer or skill-based game available in the gambling industry. They’re the only games where several players compete for the same reward simultaneously and where someone might win big to prove they are the best.

Getting high points at the fish table game requires complete focus on the game. Examining the pace of the fish and avoiding hidden fish improves your chances of winning. Choosing the biggest fish and pursuing the lonely ones is a smart strategy.

Many people are searching for ways to cheat at fish table games to increase their chances of winning. The websites that provide real money online fish table games, on the other hand, apply highly secure online casino software systems to combat all forms of cheating.

In this game of chance, these tricks are worthless. As a result, rather than searching for a method to “hack,” we recommend that you use that time studying the game and practicing various tactics.

Here are a few strategies:

Whenever you are playing fish table games, always pursue the lonely fish. You do not require large amounts of ammunition for this. In the event that you fire five bullets but fail to kill the little fish, you should consider stopping. In such a scenario, carrying on is considered a waste of coins.

Take a look at the fish’s speed.

Not every fish moves at the same rate. Small fish, on average, swim slower than larger fish. As a result, shooting tiny fish will be easier. However, unlike sharks, this rule is not viewed as a significant advantage. To take them out, you’ll need to utilize additional bullets. Slow fish are simpler to shoot and kill.

The golden rule in these sports, though, is to make your shots as effective as possible. Some fish will survive more than one or two headshots. As you go through the game, you must be conscious of this reality.

Make sure your bullet is the final one to hit the fish and kill it. Otherwise, even if you just hurt the fish for around 80%, you wouldn’t receive a portion of that huge prize.

Fish table games are filled with a lot of excitement and they are available at competitive prices. The players meet and enjoy each other’s company while playing against each other. In addition, top skilled players can meet to play while testing their abilities to challenge one another for the top prize. Give it a try!