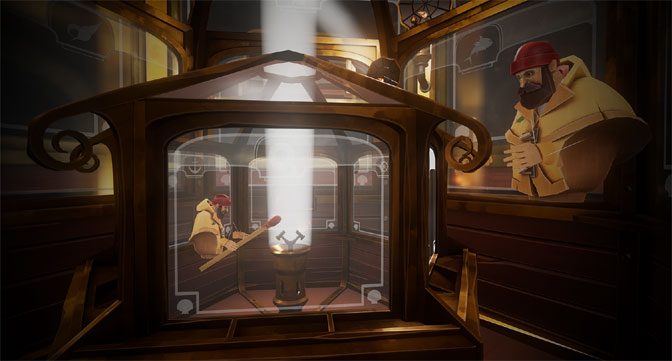 In A Fisherman’s Tale, the mind-bending VR adventure game that launches onto PlayStation VR, HTC Vive, Oculus Rift and Windows Mixed Reality headsets today, you will work with infinite, ever smaller and bigger replications of yourself to find your way out of a world where physics are utterly broken.

What does it mean to be trapped inside a replica in an elusive virtual world? A Fisherman’s Tale is a journey of both introspection and extrospection, asking players to both reach inside and outside of themselves for answers.

In A Fisherman’s Tale, players will:

• Break more than a couple laws of physics in mind-bending VR puzzles!
• Team up with yourself in revolutionary multi-dimensional single player co-op!
• Meet some of the quirkiest sidekicks to have ever set foot in a VR game
• Use your hands to pick up, throw, combine, and use all kinds of things in glorious fully immersive virtual reality!
• Toy around with your tiny little model lighthouse, inside a lighthouse, inside a… is that another lighthouse?
• Uncover the truth at the core of an unusually tall tale, exclusively in VR

A Fisherman’s Tale is now available at a SRP of $14.99 for PlayStation VR, HTC VIVE, Oculus Rift and Windows Mixed Reality. To celebrate, a 15 percent launch discount is offered during launch week.