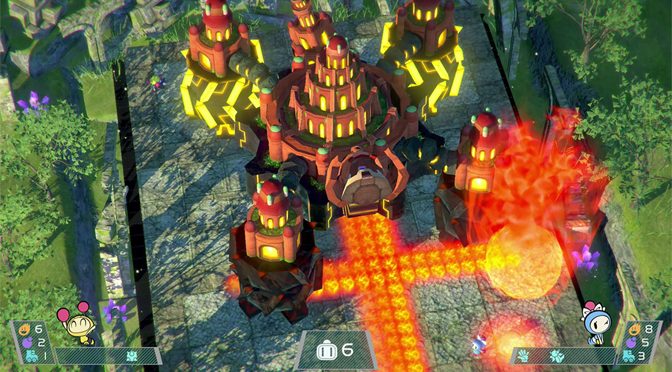 In every sector of the entertainment industry, there are some names that never seem to lose their appeal. In the music world, Aerosmith recently celebrated 50 years, while over in the books section, Stephen King continues to release best-sellers 46 years after Carrie hit the shelves.

The same can be said when it comes to gaming. The new Mario and Sonic title has dominated the headlines in much the same way as a Jagger / McCartney tour, while Pikachu continues to be one of the most recognizable pop culture icons of the past 20 years. But there’s another character who has been around even longer than these indisputable legends.

The first Bomberman game was released on an unsuspecting public way back in 1985. Originally appearing on the Nintendo, Bomberman has featured in more than 70 follow-ups and spin-offs since then, and across practically every platform imaginable.

Marketed under the bizarre name Eric and the Floaters in Europe, the first Bomberman game involved a basic maze structure in which Bomberman was tasked with avoiding enemies and using his bombs to open doors to new levels. Over subsequent years, the gameplay became more sophisticated, but the basic precept remained unchanged. Check out this review of Bomberman 64 to see one man’s experience with a retro classic.

The most recent addition to the series, entitled Super Bomberman R, was released for the Nintendo Switch in 2017. The following year, it became available on Windows, Xbox One and PlayStation 4. When you play the game, and those that came in between, there is a continuity that is plain to see.

Super Bomberman R reboots the plot of previous SuperBomberman incarnations, in which Bomberman is alerted to a plot by Professor Buggles to resurrect five robot henchmen and build an army to take over the universe. Bomberman and his inept brothers are all that stands in his way.

Getting social with Bomberman

While the main Nintendo releases have followed one path, there have been numerous spin-offs that are just as entertaining and engaging. One worthy of mention in this age of social gaming and online meet-ups is Bomber Friends. It is free to play at Gogy Games, and in some ways, it returns to the simplicity of those very first Bomberman titles, with a maze layout and bombs to help you progress. However, that is only part of the story.

In Bomberman Friends you are not operating alone. It takes on something of a Battle Royale format, as to be the ultimate winner, you need to be the last player left standing. Keep a close eye on the other competitors, sometimes it is possible to form uneasy alliances and work together, but such relationships are invariably short-lived.

Looking to the future

With diverse strands that cover multiple game types and both free online games and premium console titles, Bomberman is as much a feature of the gaming community now as he has ever been. Will we still be looking at new titles in 35 years time? We wouldn’t bet against it!