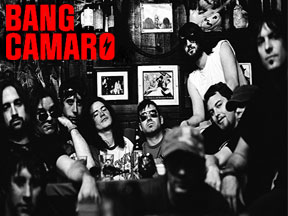 Bang Camaro is not your traditional band. Why? Because they have (currently) fifteen lead singers. This gives their music a distinctive sound. And not only are normal musical channels taking notice, their first hit single "Life is Hard On The Road" was just released, but game companies as well.

Bang Camaro is featured in Rock Band 2 and The Sims 3. And if founder Alex Necochea has anything to say about it (along with the other members of the group) you will be hearing a lot more from Bang Camaro in games in the near future.

We banged out some questions for Necochea about music in games, his musical style, and just how in the heck they can keep a band of over 15 guys from killing each other out on the road.

GiN: So I suppose the first thing that people notice with Bang Camaro is how many people you have in the band. We've heard there are twenty of you and fifteen lead singers. How does a band like that get started?

Necochea: By accident. Bryn Bennett, lead guitarist and co-founder, and I were playing in indie-rock bands in Boston for years. We got to know each other when our bands would play on the same bills. We quickly figured out that we both grew up as metal heads in small rural towns. Soon we both found ourselves without bands and naturally agreed to start writing together.

We wrote a collection of indie-rock style songs while we were working looking for a vocalist, but something about it wasn't quite right. One night we wrote a song called "Bang Camaro" that just had a two-word refrain and a lot of guitar solos and we decided to record it properly in a studio.

Bryn and I aren't the strongest singers and we wanted a huge Mutt Lange-style vocal sound so we invited a few of our friends to surround a single microphone and belt out "Bang! Camaaaarooo!" a few times.

When it was finished we put it up on MySpace and, shockingly, it was downloaded almost 5,000 times in a few weeks. After picking up our jaws from the ground, we knew we were onto something special and we've never looked back.

GiN: Is there a core group of people who make up Bang Camaro or is it mostly a transient group? It would seem that keeping that many people together in a band would be difficult.

Necochea: Over the years we've had a core group of guys involved in the band. We're made up of four instrumentalists (two guitars, bass, drummer) and anywhere between six and 12 vocalists. Our core groups of vocalists have been there from the beginning and undertake all of our tours with us.

From time to time we'll need to rotate a few guys in and out depending on who is available. That said, you're right. It does get difficult to maintain the group on the road. We're just like any other start up band except we have multiply our overhead expenses by a factor of three or four. This is why we've made great efforts to make our public spectacle as large as possible from day one. If we're going to be the largest rock band out there, we have to act like it.

GiN: So, can you tell us everyone who is in the band?

Necochea: Depends. What day of the week is it? Just kidding.

GiN: I just have to ask, does everyone like each other? A lot of bands with only four or five people have huge fights and break up. Like your hit song says, "Life is hard on the road," so how do you keep 15 people in a van from killing each other while you tour.

Necochea: I would like to answer your question with a question of my own: how do you keep your family from killing each other over the holidays? Answer: Booze. It's a great equalizer and seems to keep everyone feeling good and woozy. Everybody knows that no one likes to fight after a few Harvey Wallbangers. It's true of family and it's true of a Rock'N Roll traveling circus. But, seriously. Life IS hard on the road.

GiN: How would you describe the type of music you play? Your style? And does the fact that you have so many members give you a unique sound over most bands?

Necochea: BANG CAMARO is a rock band. We are taking the time old tradition of bad boy rock'n roll and moving it forward. All of us grew up loving all kinds of music, from The Beatles to Motley Crue. What we do is homage to those artists and bands we wanted to be when we were young.

I guess the best way to describe is anthem/arena rock. We're not out here trying to be the next Bob Dylan or Joan Baez. We just want to make music that makes people want to raise their fists and bang their heads.

Having strength in numbers certainly helps give us a unique look and sound. Skid Row and Motley Crue couldn't reproduce the huge gang vocal sounds on their records when they played live. We wanted to take that a step further and make our vocal sound as huge as possible. The best way we knew how to do it was to invite as many of our friends to come sing with us. It's worked out well so far.

GiN: How did you get involved in music for gaming?

Necochea: When BANG CAMARO got started, Harmonix was developing Guitar Hero 2. Harmonix is located in Cambridge, Massachusetts and is staffed by many local musicians. Fortunately, the Boston music scene is not that large so the developers knew what we were doing. Being a band that features big loud vocals and lots of guitar solos was perfect for the games they were developing. They asked us to contribute a song and, much to our surprise, they accepted it.

GiN: Were members of your band fans of Rock Band or the Sims prior to you providing music for those games?

Necochea: We submitted "Pleasure (Pleasure)" for Rock Band before seeing the game. We were all fans of Guitar Hero at that point and knew that whatever improvements Harmonix was making on the video rhythm game concept were going to be amazing. And, they delivered. As for The Sims, Bryn and I are contemplating writing an entire record in Simlish.

GiN: Those of you who play games. Which ones are your current favorites?

Necochea: There are many in the band that play games. I often catch Bryn in the van banging his temples playing Puzzle Quest when he needs to get away from it all. Morgan Brown, one of our vocalists, spends a good deal of time in front of his gaming console playing Gears of War 2, Rock Band 2, DOTA, and Castle Crashers. Personally, my gaming experiences came to an end when I could no longer find the original Tron at my local arcade.

Necochea: Again, I'm probably not the best guy in the band to ask – but when I was little I spent an inordinate amount of time playing Tron, Dragon's Lair, Star Wars, DigDug, and Missle Command. I am old school legit.

GiN: How important do you think the music is to a player's overall enjoyment of a game?

Necochea: I think it depends on the player. Judging from the people I've met at BANG CAMARO shows, the music is very important. I've had conversations with kids who never would have discovered Black Sabbath, Deep Purple, Motley Crue, and Bang Camaro if it wasn't for Guitar Hero and Rock Band.

If people are discovering new and old music because of their interest in a game, I feel that speaks to the lasting nature of the music itself. If people were playing the same games to the theme of Doogie Howser MD or Captain and Tennille, I don't think they would have the same impact.

But, what do I know? There's probably a market out there for that too.

GiN: How do you think your personal music will enhance both The Sims and Rock Band? With Rock Band, it's fairly obvious I guess, though the vocal tracks might be pretty interesting. What about The Sims?

Necochea: Having our song, "Revolution," in The Sims 3 will probably sell a few more million copies of the game alone. BANG CAMARO is that important.

Joking aside, if Sims fans take three minutes out of their gaming experience to rock out to us then I guess you could argue that their experience is enhanced in a rock'n roll kind of way. That's what we do in real life, so why not apply that to the world of Sims?

GiN: From a totally geek point of view, how psyched do you get when you load up a game and hear your own music playing in the background, or trying to play along with the Rock Band Instruments?

Necochea: When I first heard "Pleasure (Pleasure)" during the closing credits of the first Rock Band, I wet myself. I've been saying that a lot lately. Apparently, I'm incontinent.

Seriously, whenever I've tried to play any of our songs in Guitar Hero 2 or Rock Band, I fail miserably. Apparently, playing guitar and writing music doesn't necessarily make you a gaming pro.

GiN: From a business point of view, do you think the deal with E.A./Artwerk will help expose Bang Camaro to a larger audience?

Necochea: Absolutely. That's why we made the deal. We see immense value in having our music exposed non-traditionally through video games. Since our first placement in Guitar Hero 2, BANG CAMARO has been able to tour the country and play in front of thousands of people. If we can continue to reach more people through inclusion in more video games, that's a good thing for us.

We just want to be able to make records, meet fans, and play our music to as many people as possible. Artwerk is there to help make that dream a reality.

GiN: Would you be open to providing music to more games?

Necochea: In a heartbeat. Like I said, having our songs in games has allowed us to reach a new audience of music fans that we probably would not have found otherwise. Hopefully, having more music available in games will allow that trend to continue.

GiN: Can fans buy or listen to your songs now? Let us know where to catch you guys.

Necochea: Our records are available at local record stores nationwide. From Best Buy, FYE, Specs, and Hastings among many others. As fans continue to go to their local record shops and request BANG CAMARO, more stores will stock our albums. Fans calling their favorite local radio stations and requesting BANG CAMARO will help as well. In addition, our albums are available for online purchase at our website, www.bangcamaro.com, as well as through iTunes and, of course, at all BANG CAMARO shows.