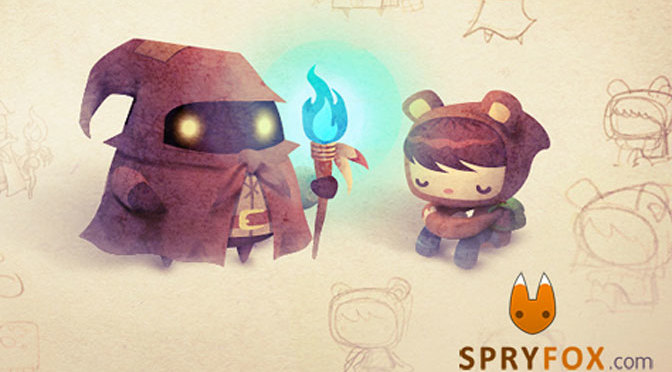 Back in August, I reviewed Road Not Taken (available on PSN, PS4, PC and Mac). I appreciated the feel of this intricate puzzle game and the surprising scope that the developers at Spry Fox were able to manifest. I recently had the chance to talk with Daniel Cook, co-founder of Spry Fox and designer of Road Not Taken to explore the philosophies he has as a designer towards game development, future projects he is currently involved with, what influenced him to become a designer, and how he views the industry as a whole.

GiN: What was the inspiration behind Road Not Taken, and are there any hints you’d be willing to divulge to our readers?

Cook: Road Not Taken came about from two directions. First we were prototyping a puzzle rogue-like.  At the same time, I was thinking a lot about family and children and what it means to go through life without completing all the traditional win conditions of marriage, kids and grandpa-esque retirement. The two merged together to become the game, Road Not Taken.

This sort of thing is pretty common. We are a very prototyping heavy studio.  Most of our projects start with a mechanical prototype.  Then as we play test the prototype, we try to notice emotional notes within the dynamics that suggest a theme. From that point forward, the mechanics and the world evolve hand-in-hand.

If you are playing Road Not Taken on Steam, we just added mod support.  So all the configuration files are available for you to mess with and create your own custom mix of the game.

Here’s a secret: if you turn on the included mod, you’ll notice that there’s a new type of object called a dragonfruit seed. This object actually persists from year to year.  So not only can you make objects that exist in a single year, you can play the game as if you were farming and investing in the world across your whole 15 year career.  It changes the feel of things quite a bit.

I love these sort of systems that break boundaries.  We tend to think of a single level as complete onto itself, but when you have persistent objects, your actions in one level end up bleeding into the future. As an advanced player, you start playing a very different strategic game than the newbie who is concerned with mere tactical survival.

Cook: We’ve got a couple games we are working on at the moment. One that excites me the most is an action MMO in our Steambirds universe. Not so long ago, we worked on a game called Realm of the Mad God and it was hugely satisfying to be designing for such a vibrant community of players.  It really turned me onto designing games as a service and that’s always been something I’ve wanted to return to.  I got my start with an old PC shareware shmup [shoot ‘em up] named Tyrian, so there’s an element of returning to my shmup roots.

Cook: One of the things at the heart of Realm of the Mad God was the cooperative gameplay. As an industry, we tend to be hyper focused on competitive multiplayer, but I’ve always really enjoyed the emergent gameplay that results when a group of people work together to take on a huge external challenge.  You get to see players grow from a mindless mob all clustering together and slowly turn into more organized high skill guilds doing impossible things.  We’ll double down on that for the next Steambirds.

GiN: Working in a creative field requires a lot of drive and perseverance. Not everyone tries to make it in video game designing stays in this crazy industry. Were there any games or people who influenced you to become a developer?

Cook: I got my start making games 19 years ago and there wasn’t quite the same culture that you see now. I don’t even recognize the word ‘gamer’…that’s like a weird marketing term coined way, way after my formative gaming years. Mostly I played games on the Amiga and as such was hugely influenced by the European developers of that era. One that comes to mind is The Faery Tale Adventure created by the polymath David Joiner. He programmed, drew, animated, and composed everything in what was for the time a huge open world game. But games like FTL’s Dungeon Master or Bullfrog’s Populous also got lodged in my brain.  These were fringe people doing original games. Pioneers. They invented entirely new genres, because that is how you made games. You wake up one day with no support from anyone and you make an insanely great new thing.

Perseverance is a good term that’s critical to being a game developer.  Mostly the games we make fail or are tossed into the trashbin of history. There’s something very much like creating sand mandalas about the whole ritual of making digital games. You do it because you love making games.  The fact that games are made is almost a side effect of the obsessive, persistent, creative process.

GiN: Looking at the game industry today from your position as a game developer or artist or writer, what do you feel are the biggest challenges?

Cook: Making games is quite expensive. It involves a lot of very talented folks that likely could get better paying jobs elsewhere and it eats up an enormous amount of their time. So most productions I’ve been on have had an interesting balance between paying the bills and making something great. What compromises you are willing to make?

Road Not Taken, for example, was actually one of the most compromised projects I’ve worked on. There’s this content-based form of game that lives on Steam and consoles.  It tends to be a content heavy, consumable game that you ‘beat’. It takes lessons from movies and books and shoehorns ‘game’ into just another form of media. Road Not Taken was intentionally engineered to be this sort of packaged game with a message and story. So we could sell it on Steam. So we could sell it on consoles. I explicitly tried to structure my evergreen designs into a format that might work well for a traditional consumer of games.

At the moment, I really don’t want to make a game like that again. The constraints of premium games just feel…icky. It can become merely about the promised content. You craft this pitch to get people to buy without playing the game first. Then you market the hell out of that. The audience is an audience used to sucking up a new game, burning through it and then jumping onto the next thing. Like television or a book. I think if you were raised on consoles, these media-centric conventions might be burned into your brain so that they are just accepted as a way of the world.  But they are really design and business choices.

Making games like Triple Town or Realm of the Mad God that people play for years has been far more satisfying. They are ongoing human processes and I love that. You end up with a game that remains an active part of someone’s life.  And you get to grow the game with them, a direct conversation between the community and the developers. I feel that’s rarer in the world of consumable games. But never say never. At some point in the future the right opportunity might show up and I’ll have to think hard about whether or not it is worth my limited time on this planet.

Cook: Games as services and individual games as a hobby are only going to grow.  You’ll see single games take up 80-90 percent of a player’s time and money.  These will be massive businesses, but there will only be a handful of companies in each hobby category.  Because such games like League of Legends are so deeply sticky, they suck all the oxygen out of the market for the existence of competitors.

Lots of little game companies exist (and die) in the premium space because the games they create are so ephemeral.  You need to move onto something else and your relationship with you players is incredibly weak.  So there’s lots of space for a competitor to sell them a similar game or an alternative experience.  That gap between big titles is filled by little titles that are pretty much more of the same.  If I like Gone Home, I’d love another game that’s sort of like it. The Gone Home folks can’t turn out content fast enough to satisfy my desires as a consumer.

That same gap doesn’t exist with games as services. You can play League of Legends every hour of every day for years on end. You don’t need another game. You aren’t a ‘gamer’ that plays lots of games. You are a ‘League of Legends‘ hobbyist.  Now someone with massive reach like Valve can push their way in, but the gaps really aren’t there for most other folks.

So my prediction is two fold. The big established game-as-services companies are going to grow bigger and consume more player time. And there will be new game-as-services companies that creating massive new markets.  But they won’t be within the old categories. If baseball is a big thing, you don’t go out and try to compete with MLB. You go out and invent basketball.