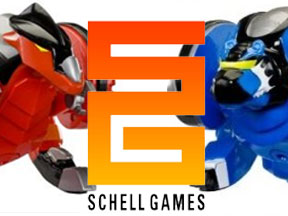 This week we turn our attention to Sheri Graner Ray, the Studio Design Director for Schell Games. Their new interactive toys, the Mechatars, move back and forth between the real and video game worlds, and Ray thinks this is only the beginning.

Given that Ray got her start playing Dungeons and Dragons, moving between fantasy and reality seems like a perfect fit. She figured getting into the game industry would allow her to be a dungeon master to the world, and Mechatars is one step in the right direction.

We chatted with Ray about the innovative Mechatars, what it’s like overseeing all of Schell Game’s projects, and what she believes will be the next big thing.

Ray: As I’m the Studio Design Director, I don’t have a specific project I’m working on. I oversee the designers on all our projects. That said, we recently launched a title I’m very proud of! You may have seen some of the advertisements for the amazing toy called "Mechatars." ( http://www.mechatars.com/ ) They are a robot toy by Bossa Nova. They also have an online world component which we produced.

When you plug them into your computer, the robot is immediately transferred into the virtual world where they can battle other bots and level up. As they level up they gain new attacks which are downloaded to your physical robot in the form of new sounds and effects.

GiN: What is it about Mechatars that you think players will especially get a kick out of experiencing?

Ray: This is a particularly exciting project for us as it allowed us to work with the concept of moving the player back and forth between the real world and the virtual world seamlessly.

Ray: Probably Dungeons and Dragons…I really didn’t know any game developers or even a lot of games before I got started. Remember, I started in 1989. In fact, we were the only game company in Austin at the time, so I didn’t even know any other companies. But, I’d been running Dungeons and Dragons games for a long time and saw computer games as a way to run games for lots of people all over the country.

GiN: Looking at the game industry today from your position now, what do you feel are the biggest challenges?

Ray: Trying not to lose all the other genres of games in the excitement that the social/facebook style games are causing. There basically is a huge rush by the publishers now to move all development to the social networks. While I can’t say that’s all a bad idea, I’m afraid we will soon find it hard to find funding for any of the more "traditional" game styles.

Additionally, I don’t want to see the publishers put all their eggs into one basket. That’s a huge risk.

Ray: Tablet gaming. I really think that’s the direction it’s going to go. Tablets are a different platform and medium from mobile. They are somewhere between mobile and PC as far as the entertainment needs that they fill. I look forward to seeing what comes out for them in the future!