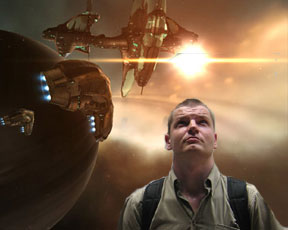 In a world filled with multiplayer games where elves and dragons frolic, one company dared to do something different. Instead of looking into the past or to storybooks for inspiration, they looked up.

Fascinated by space games, Iceland-based CCP launched Eve Online, a game which challenges players to survive in a huge universe populated by all sorts of characters from greedy space pirates to noble freedom fighters to merchants that just want to turn a profit. And the entire universe is explored from the seat of your custom equipped spaceship.

Besides being one of the most gorgeous online RPGs ever created with sweeping vistas of space, like the kind found in blockbuster sci-fi movies, Eve to a large extent turns over the keys to the kingdom to let gamers form the politics and even the physical makeup of the world. This freedom has been very attractive to gamers, who have been flocking to Eve Online in droves lately.

We explored the motives and the successes of Eve Online with founder Reynir Petursson.

GiN: How was the idea of a persistent online world in space-type of genre conceived?

Petursson: This game just had to be done. The game "Elite" was the greatest inspiration for doing this type of a game. We wanted to create a living, breathing universe where the players could truly impact the world and make a difference. A universe, one could believe truly existed.

GiN: When was Eve Online launched?

Petursson: EVE Online was launched in May 2003 and has been growing steadily ever since. Every day new people discover EVE and join.

GiN: I know Eve Online is huge, but can you give us an idea of exactly how large the game universe is?

Petursson: The game universe consists of roughly 5000 solar systems. Every solar system has several planets, dozens of moons and asteroid fields. On top of that there are thousands of space stations and thousands of special locations to explore. The world is brimming full of intrigue and adventure.

GiN: Eve Online really is focused on the players, who create and shape much of the world. For someone not familiar with the Eve Online Universe, can you describe a bit how players can shape the game to a much larger extent than is found elsewhere?

Petursson: EVE Online is quite unique in this sense. The players create a lot of the content themselves through their actions and organizations. The player interaction and politics in EVE are on a level beyond anything previously done. Players can affect the world in so many ways.

For instance, almost every item sold on the market in EVE is manufactured and researched by players. The player-run Alliances have grown to thousands of members and they wage war on other player alliances. These wars are the largest wars ever waged in gaming history.

The depth of the politics, organization of the infrastructure, scale of the logistics, intensity of the fleet battles and the true leadership involved in these wars is just something out-of-this-world.

GiN: Does this style of gameplay make it more difficult for company officials to manage the game, or has this not been a problem?

Petursson: It definitely makes it harder to manage. Everything needs to be so perfectly balanced, and because of the open ended nature of the game, it is harder to spot problems beforehand. So we are always on the lookout for faults in the system. In the end it makes EVE a much deeper and better crafted game. But yes, it can be a headache for us keeping everyone happy! (smiles)

GiN: Recently Eve Online has been hitting some milestones in terms of simultaneous players. How many people currently play Eve Online?

Petursson: Our subscriber numbers are just under 70.000. Our current record for simultaneous users playing at the same time is 13,933, which is a world record for the highest amount of people playing in the same virtual world at the same time.

GiN: Is everyone able to play in one persistent world or will you need to add new shards or worlds in the future as many other online games do?

Petursson: Everyone will be able to play in the same universe. We can easily double the capacity of our server cluster without major technological changes. Above that we will need to make some underlying changes, but in theory there is really no hard limit on how many players can play together in one world if it is done correctly.

GiN: There is player versus player attacks in the game, yet it does not get out of hand. Can you explain how you implemented PvP so successfully without making it take over the entire game?

Petursson: PvP has been a very controversial subject in many games as it has ruined the game experience for many players. However, PvP is also one of the most exciting and rewarding gaming experience possible. So it is a double-edged sword.

We knew beforehand that PvP had to be regulated in a sensible manner, so we split the world up into different security zones. This means that the players who do not wish to engage in PvP can play the game without doing so, and many of the richest players in EVE actually never do any PvP. However, real power comes from reputation and the best PvP players earn respect from their peers and are the true heroes (and villains) in EVE.

GiN: Recently you released The Cold War expansion pack to all your players for free. What did the new pack add to the game?

Petursson: We do free expansions every six months. With "The Cold War Edition" we added a host of new features to the game: Player built outposts, new ship classes (Dreadnaughts and Freighters), hundreds of new special locations, new mini-professions, system sovereignty, new equipment, new missions, new NPCs, Unicode character support, and literally thousands of small tweaks and improvements. We have a team of 50 people working around the clock to make EVE better and better every day.

GiN: Have the fanfests in your native Iceland been a success? What kind of activities happen during a typical show and how many people normally attend? Also, when is the next one?

Petursson: Our first Fanfest was held in October last year and was a huge success. Around 350 people attended from all over the world and it was just incredible. Our next Fanfest is being held in Reykjavik from October 20th to the 22nd. We are preparing for it now and it will be loaded with activities.

GiN: You have a huge collection of fan-based fiction on your Website. How did you foster such a huge fan community that generates so much content?

Petursson: A game like EVE is nothing without its community. The community is the game after all. We feel is it of vital importance to be in constant communication with our community, and EVE definitely reaps the benefit of it and is a much better game for it. Hundreds of people have contributed directly to EVE in many ways since its launch: Fiction writing, game balancing, game design input, bug hunting, testing, tools programming etc.

And on top of that there are the best community sites I have seen for any game out there. The community of EVE is just incredible.

GiN: Any big surprises on the horizon you could hint to us about?

Petursson: It wouldn't be a surprise then, would it? (laughs)