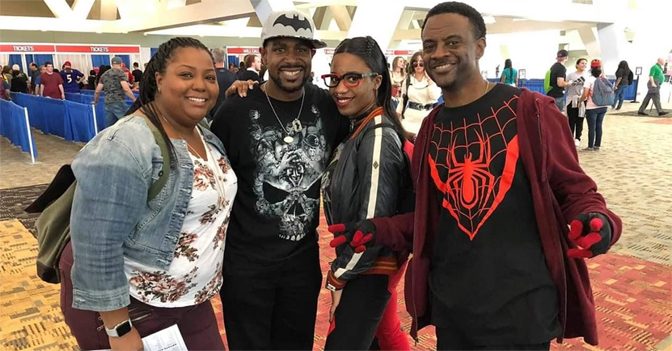 As with each year at Baltimore Comic Con, thousands of attendees come to the event dressed as their favorite heroes and villains from the world of comics. There are no shortage on awesome cosplays for people to see. 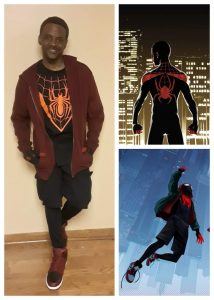 One of the most common characters you’ll see is Spider-Man! I probably saw about 10 to 15 different variations of the web-slinger throughout the convention, but one I was interested to see the most was Miles Morales. Now, in all fairness this was due to my excitement behind the upcoming animated movie, Spider-Man: Into The Spider-Verse, by Sony Pictures that is due December 2018.

As I searched I became a bit discouraged, but ultimately was able to find Miles Morales/Spider-Man! And he was kind enough to speak to me about not only his idea behind the cosplay, but his overall thoughts on the convention.

The man behind the costume is 35 year old, Brandon Bazemore of Baltimore, MD. When I asked Brandon about his motivation behind the costume he response was, “…I actually wanted to go with Black Panther or Killmonger, but I felt I could make this work.” 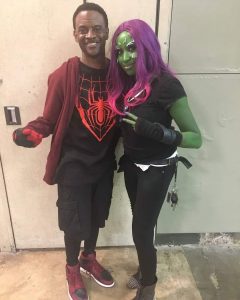 He describes scrambling to put his outfit together a week before the convention. “I had the shirt and I just grabbed a pair of Jordans. I felt with the animated film coming up, this would be a cool way to represent Spider-Man,” he said.

Brandon went on to discuss with me how the event being held in Baltimore made him feel. He felt that it was nice to see the “culture of comics being represented in Baltimore city.” Which was a common sentiment among attendees this year and from years past. He did express interest in attending the Comic-Con in San Diego in the future, but for now was happy that his first experience was in Baltimore. Oh, that’s right…this was his first convention! Pretty cool!

For Brandon to create his cosplay for his first convention was a cool moment and I wondered what he would do to follow up for next year. He wasn’t sure, but definitely had learned from this year. “I’m definitely going back next year! And I’m probably going to prep my cosplay two to three months ahead of time. However, I have not decided yet,” he mused. 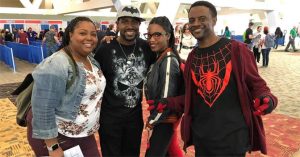 To make the moment even more special, Brandon was at the convention with friends, Shaun McElwee and Tracy Raymond. This was Shaun’s second convention and he thoroughly enjoyed his experience. Running into friends at the event, meeting Mike Colter, the star of Netflix’s hit series, Luke Cage, and taking endlessly fun pictures of all of the cosplayers made this year’s event one to remember.

One thought on “Interview with a Baltimore Comic-Con Cosplayer”