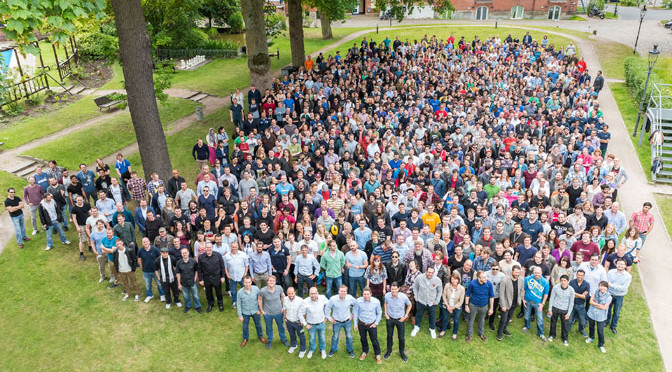 We talk with Ina Bourmer from Goodgame Studios, one of the most exciting developers in Europe, to find out why 1,200 talented game designers from sixty nations have already committed to joining up – and why signing on with Goodgame might be a really great move for those who want to move up, or move into, better careers in the game industry.

Gameindustry: Can you tell us a little bit about how and when Goodgame Studios was founded?

Ina Bourmer: Goodgame Studios was founded by the brothers Kai and Christian Wawrzinek in 2009. They have always had a strong passion for entrepreneurship, but before taking the big step of founding their own company, they actually studied medicine and law in order to have a plan B up their sleeve. During their studies, they regularly met with fellow students in order to discuss business ideas and that is how they decided that the Internet had to feature in their plan.

They founded their first company in 2003, focusing on buying and selling websites, including platforms for games. With Goodgame Studios, they started producing their own games. Their seed capital was 500,000 euros loaned from a German bank. Now, six years later, they have more than 1.200 people working for them and a turnover of 200 million euros.

Gameindustry: This might be obvious, but is there a story behind your name?

Ina Bourmer: Yes, it is indeed quite obvious: our biggest aim is to make really good games, hence the name “Goodgame Studios.”

Gameindustry: What are some of the successful games that Goodgame Studios has created?

Ina Bourmer: Our most successful products are the browser games Goodgame Empire and Goodgame Big Farm as well as the app Empire: Four Kingdoms. The mobile game, for instance, now has over 45 million registered users and was the world’s highest grossing app by a German developer last year.

Gameindustry: At Goodgame, do you focus mainly on creating games for one platform, or are you developing for multiple ones? Are there any areas that you want Goodgame to “own” or become the market leader in?

Ina Bourmer: We started with browser games and then moved into mobile as a second step. Mobile is our main focus at the moment, but our games are generally planned for multiple platforms. One of our upcoming products will be a puzzle game – which is an exciting new genre for us – and it will be launched on Facebook, too. That is also a first for us and we are very excited to see how it goes. But platforms are in fact not a decisive factor for us, because we are convinced that free-to-play games can work universally. We see ourselves mainly as experts in free-to-play, and we want to become the market leader in that segment.

Gameindustry: You are based in Hamburg, Germany. We have interviewed many companies from all around the world and they have told us about the challenges and benefits of their home location. First off, what has it been like being based in Europe?

Ina Bourmer: What makes Europe so great is its diversity. We have all these different countries and cities right next to each other, and all of them have a different gaming culture. There is a lot of great talent around and the startup scene is booming, not just in the typical tech capitals such as London or Berlin, but also in other cities where you would expect it less – Hamburg is a good example here. For a young company like Goodgame Studios, Europe is also an excellent location because of its vibrant flair, because people from other parts of the world like to move here. We now have people from more than 60 nations working at Goodgame Studios.

Gameindustry: Now specific to your home city, what is it like to be a game company based in Hamburg and Germany in general? Is the government (both national and local) supportive of game development companies?

Ina Bourmer: Gaming is a growing market within the German entertainment industry, and our home city Hamburg plays an important role as Germany’s leading gaming city. It has become a proper gaming and startup hub and has provided us with a very good infrastructure and environment for our growth. Hamburg is a very solid and strong economic center with a long hanseatic tradition, which goes well with the founders’ entrepreneurial approach. The city and Germany itself also have a great reputation abroad, which helps us attract more talent from all over the world – and the fact that Paris is only four hours away is also a big asset!

Gameindustry: Looking at your webpages, it seems like you have a really fun work environment. Is it really true that you have a pool and lots of other fun things for employees to enjoy?

Ina Bourmer: Yes, we do indeed have a pool as well as many other fun benefits as well, such as diverse sports programs, meals on campus including fresh organic fruits, and soft drinks and beers after 6PM. Not to forget our big quarterly company parties, which are always a lot of fun. For more day-to-day activities, we have our own feelgood team which takes care of our well-being, for example by organizing massages and active breaks for all Goodgamers.

Gameindustry: How do those amenities work? Are employees encouraged to “hang out” at the company?

Ina Bourmer: We encourage all employees to schedule their days as efficiently as possible and that may include shorter breaks to play table football or a longer lunch break to jump into the pool. If colleagues want to catch up over a drink after work, they can do so in our café or in our garden areas. Some of the sports programs take place at external locations, but it can also be very convenient to go to our own gym in the morning, take a shower there and have breakfast at work. Working hours are flexible with core working hours from 10AM to 5PM.

Gameindustry: About how many people currently work at Goodgame Studios, and what kind of jobs do they perform?

Ina Bourmer: Currently, more than 1,200 people work for the company in a wide variety of positions. We have recently established a new development structure with several autonomous studios which are responsible for new as well as existing products. Jobs in these studios include product and project managers, developers, artists, game designers, balancers, writers, sound designers and even data analysts. To name a few of our other central departments, we have customer operations with our support and community management teams, game technology, web development, quality assurance, localization and many more.

Gameindustry: Goodgame is really looking to hire a lot of new people. Are there some exciting upcoming projects that these new people can look forward to working on?

Ina Bourmer: Yes, we are working on a lot of exciting projects, because developing new games is our main focus for now and the upcoming months. For our new products specifically, we still have quite a few open positions. One upcoming game that we are very much looking forward to and that I already mentioned is our very first puzzle game, and we are also working on our first core title and a few other games in different genres, so stay tuned for more exciting updates from us.

Gameindustry: If someone is looking for a nice place to work in the game industry, why do you think they should consider applying to be a part of Goodgame Studios?

Ina Bourmer: First of all, Goodgame Studios is an attractive employer giving people the opportunity to really make a difference by bringing in their own ideas, and to be part of an exciting success story. Although we have already grown to a certain size and are continuing to expand, we maintain the flexibility needed to stay on top of the game in a fast changing and fast growing market. We have established a great basis for our future success.

The working atmosphere at Goodgame Studios is awesome, too: while we are very goal-oriented and committed to our projects, working here is also a lot of fun, because we all share the same passion and everyone is very friendly.

Hamburg itself is also a very inviting city with an elegant and cosmopolitan flair rooted in its history as a rich harbor city. While Germany’s capital Berlin attracts mainly young people in their twenties, Hamburg is more laid-back and has a lot to offer to those who are looking to take their career to the next level.