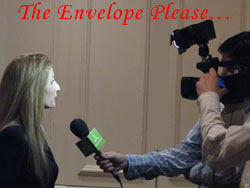 Have you been to The Elans yet? If founder Holly Carinci has her way, the game industry is going to have a premiere destination to show off its talent that is on par with a little friend named Oscar.

Now in its second year, the Canadian Awards for the Electronic and Animated Arts (The Elans) honors the best of the best in three industries. And although last year the focus was exclusively on Canadian companies, this year a new international category is opening things up to game developers, animators and digital arts education professionals worldwide.

We caught up with Carinci (not an easy thing to do a week before the big show) to chat about how the Elans was created, what attendees can expect this year, and the future of this great endeavor.

GiN: The Canadian Awards for the Electronic and Animated Arts is starting to become the true destination for people working in the three industries of Video Game Development, Animation and New Media/Digital Arts Education. But before 2006, not a lot of attention was paid to Canada's exceptional industries. How and why did you decide to found the awards?

Carinci: I owned and operated a publicity company for 13 years and one of my clients, David Kaye, an exceptional voice-over talent, was with me for all of those years. Through my work for David on building his career, I became quite familiar with the animation and video game industries. One day a friend suggested I produce a video game awards show for Canadians and I decided to do just that, but it had to include animation as I was already well-aware of the convergence of the two industries. I wanted the up-and-coming new talent to be featured too, as that would greatly benefit both the students and the 2 industries we were awarding.

Carinci: More and more every day, and you can add Film and Television, especially film, into that mix too. Because movies like the series of Harry Potter Films or The Golden Compass, Night at the Museum and countless more coming out every month, we are going to add Film Categories to the 3rd Annual Elan Awards because currently there are no categories specific to this phenomenal growth in popularity through the convergence of these three industries.

As it stands, none of them qualify for "Best International Animated Feature" as they're not wholly animated. The games produced alongside the films qualify, but the actual production does not and we intend to acknowledge the importance of this form of film.

New Media/Digital Arts Education is an interesting area in that they need to grow and change quickly, more quickly than they currently are I believe. The Video Game and Animation industries move light years in just one year and so the curriculum offered to Students one year isn't going to get them a job the next if they are not educated in that year's art and technology of Video Gaming and Animation.

And I should stop calling it Video Gaming here, as it really is Electronic Gaming, just another example of the growth and divergence in that remarkable industry.

GiN: How difficult was it to pull the first Elans awards show together? Did you meet a lot of resistance, or did it seem more like the right show at the right time?

Carinci: Aaaah, you don't have enough room on the entire website for me to tell you our stories! Let's just say "both." No question that it was and is the right show at the right time"none. Remarkably, however, we certainly met a LOT of resistance, mostly from Government entities in Canada as up here if the Government doesn't own and control it, they see no benefit in delving into their budgets allocated by the people to do exactly what it is we are doing, and that's highlighting the talent and encouraging business growth within Canada, not shipping it out! The industries we award, however, are one hundred percent behind us and not just those from Canada.

GiN: What are some of the categories which awards are given? What are the ultimate "Best Picture" type awards?

Carinci: There are a few that stand out such as Best Animated Television Production, Game of the Year and Ready to Rocket for the Students, but an interesting development to the Elans is that because we currently award three industries I have to take the number of Categories – which average 32 in all awards shows – and divide that number into three industries. This means that the more popular awards, such as Best Direction, etc., are really all that remain for us to give out.

That said, the talent who get left out mostly from the technical side of the business are very, very important as well, but there are other award shows that do a very good job of honoring them.

We simply cannot fit everything in.

GiN: What were some of the projects and people who won last year?

Carinci: Everyone from the ‘biggies' like EA and Ubisoft to BattleGoat Studios out of the small town of Lynden, Ontario. I love that about these awards. Everyone has an equal chance, no matter how big or how small.

GiN: Do you need to be working in a Canadian company to win an award?

Carinci: Yes, you do, other than the International Categories we added this year, two for Animation and two for Video Gaming as well as one for Students. Also, co-pro's are eligible as long as 51% of the work was done in Canada and that breaks down further into the actual categories.

For example, the production may not qualify in Best Direction because it was done by an American but it can certainly qualify for Best Art Direction if it was done by a Canadian in Canada. It has been a priority of mine since the beginning to ensure that Canadians are no longer left out of the accolade given to a production owned and/distributed outside of Canada.

The Elans award the artist, much like the Oscars. Having said this, we intend on expanding the number of International Categories every year as we believe we're not doing Canadian talent any favors by keeping the competition within the country. They're all good enough to compete on an International level, but assuring them of this takes time and so we will move at whatever speed they are comfortable with. The industries themselves choose their Categories and Criteria. I only provide guidance.

GiN: What type of judging process do nominees go through? Do you have industry people judging each entry or is it a voting process among members?

Carinci: We have industry professionals judge each category. Four Final Nominees are selected by the Jury Panel as a whole; in other words they must all agree on their final four. Each member then becomes a Judge for the Winner of the category they reside over, and they individually and confidentially send their Winning Vote in directly to our Awards Auditor, Buckley Dodds. Even I don't know who the winners are until their names are announced on my stage.

GiN: This year you have Family Guy creator Seth MacFarlane hosting the awards, which must be a huge boon to you. How was MacFarlane chosen as host and what do you think he brings to the Elans?

Carinci: I can tell you how he was chosen, which was through our constant communication directly with the industries we award and they chose him, but to say what I think he brings to the Elans would be a never-ending list of attributes! He's one of the most popular figures in animation"he's unbelievably funny, known around the world and easily one of the nicest and most accommodating stars I've ever worked with and I've worked with a LOT during my years as a publicist. I can't gush enough.

GiN: The Vancouver Center for Performing Arts where the Elans is being held is a beautiful building. Why did you choose this venue and are you expecting a large attendance this year?

Carinci: We already have a large attendance in that we have only about 500 seats left of the 1,880 The Centre holds and most people usually purchase their tickets during the last two weeks before the show, so I'm certain we'll sell out. The Vancouver Centre for the Performing Arts was chosen for many reasons, one of which was that we knew we'd need a much larger venue. But most importantly the Centre is, as you said, a beautiful building and it is one of the few that can provide the Oscar-like setting for the Elans we require.

GiN: In addition to just the awards, we assume that the Elans is really an overall event not to missed. What other activities go on in addition to the awards show that attendees can expect?

Carinci: The After-Party, of course! It's being held at the Library, believe-it-or-not, across the street from the Centre. The architect for the Vancouver Library built it with the Roman Coliseum as his vision and it is stunning. It is sponsored by the Seven Group which specializes in building animation and video gaming studios so you can imagine what they bring to the setup, along with N-Gage by Nokia which is working their own magic with us to put on an unforgettable ending to our awards show.

There is an industry event, the "CIV" being held at our hotelier, the Sutton Place Hotel by our Strategic Partner, Ernst & Young, the following day from 11am – 3pm which is for industry CEOs and upper management only, and Seth is going to be on the panel of experts. You can purchase a ticket to this, but you must be pre-approved because we are holding this for only 300 industry professionals in order to give them the opportunity to discuss important issues such as the convergence of Animation, Electronic Gaming and Film, as well as tax incentives in Canada, etc.

Most events are set up for marketing and human resources and we wanted to provide the CEOs coming to our awards an opportunity to do business-to-business with each other in a very classy but informal environment as they rarely have even met one another.

GiN: We have seen your quote that implies that you would like the Elans to become the Oscars of the video and animation world. How close do you think you are to making this dream a reality?